Brittany and Joe: The Story at the Stone House 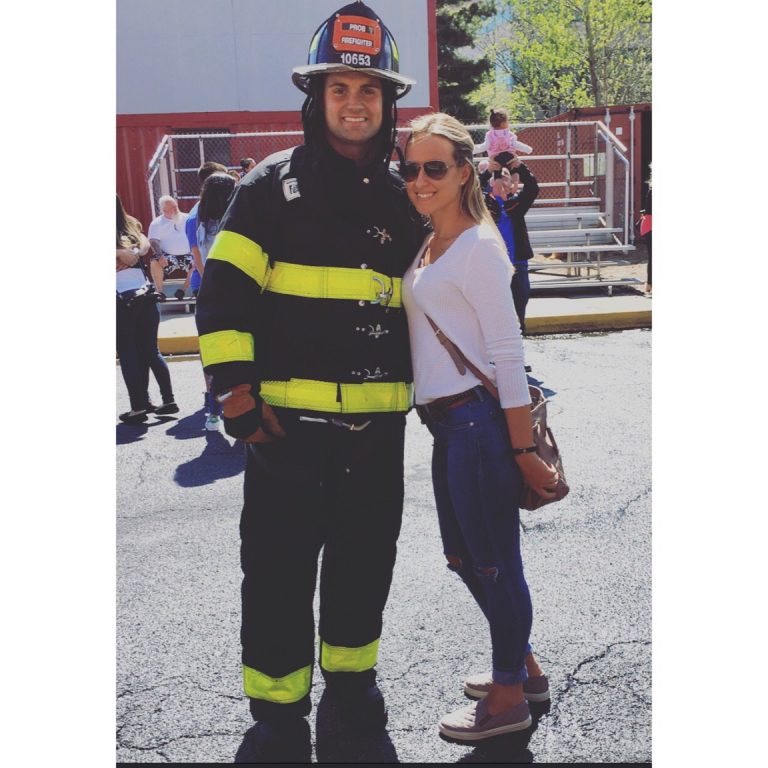 In May of 2014, Brittany and Joseph met by chance after both almost cancelled plans with their respective friends. Though she was exhausted from work, Brittany felt bad cancelling on her usual Thursday night plans with her friend and Joe's friend Anthony refused to take no for an answer and by a stroke of fate, they ended up in the same bar on what should've been just an ordinary night out. Brittany's mom had always told her "You never know when you're going to meet your soulmate…" She couldn't have been more spot on because the moment took them both by surprise and it was clear that something good was going to happen. A night of exchanging glances, followed by moments next to each other at the bar without conversation finally led Joe to ask Brittany to dance. Nearly three years later, they haven't stopped dancing since.

The Perfect Proposal, According to Brittany:

"On a Monday evening in January, out of the blue, Joe mentioned to me that we would be attending what I *thought* was a tax dinner meet and greet before the start of tax season. He advised me that I should dress up and have my hair and nails done because his boss was very judgmental of others appearances (eek). The "tax dinner" was being held at a beautiful local restaurant called The Stone House. I knew how beautiful this place was because we had been there once before. I figured it was a little too formal for a meet and greet, but I didn't question anything. Joe knew I was stressing about what to wear since I've never had to go to a "tax meet and greet" before, so he offered to take me shopping to alleviate some of the stress. I had no idea he was helping me pick out the outfit I'd be wearing for one of the biggest nights of my life. I won't lie, I wasn't looking forward to the dinner, and I was especially NOT looking forward to meeting his super judgmental boss.

On Monday when we arrived at the Stone House, the waiter and a few other workers were standing inside to greet us. One of the workers inside mentioned that we were the first to arrive, and suggested that we should go outside to take pictures of the scenery while we waited. All I could think of was: A) Why is it that we're going to go outside when it is FREEZING, and B) What scenery is this man talking about? I was winter AND dark outside. Although those were my thoughts, I just said, "O.K.", and followed Joe outside. The very second I stepped foot out the door, I forgot about the weather because I noticed the beautiful illuminations that lit up the night. The trees, a fountain, a small cobble stone bridge, and a beautiful white gazebo were wrapped in beautiful white lights.

Not for one second did I think that it was set up that way for me. I mean, I knew people had special events there and judging from my past experience I knew it was a nice place. I just figured it was set up that way for someone else's event. But nope, little did I know, it was all part of Joe's plan. Joe and I walked around to the fountains as one of the workers inside followed us and snapped some pictures. . After a few pictures, the man taking the pictures said, "That gazebo is a really nice spot for a picture. Why don't we go over there." I was just going with the flow. My stomach was growling, and I was still hoping for Joe's "mean" boss to cancel or not show up. At that moment, Joe 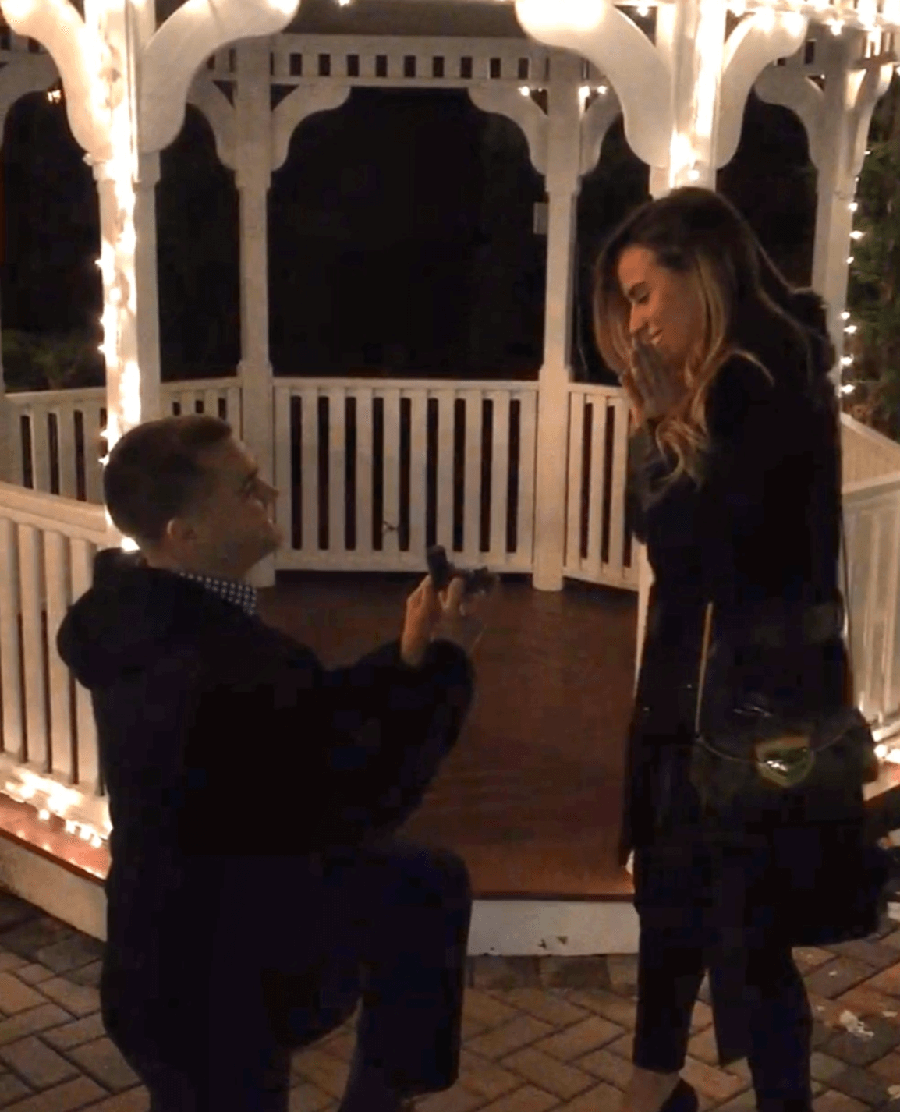 pulled me under the gazebo with him and said, "So, I have something to tell you." (At this point I was thinking he was going to say his boss canceled) "We're not here for a tax party, we're here because …." and he got down on his knee!

A million emotions came over me. For the first time in my life, I was surprised. I was shaking, and sweating and SCREAMING "OMG!" But somehow, I managed to get the words out right and I shouted, "YES!" I couldn't believe it; the man of my dreams just made all my dreams come true with one simple question! Just when I thought the night couldn't get better, Joe told me he had a surprise for me inside. When we walked back into the restaurant, everyone in the place was clapping and congratulating us. Just then, Joe took my hand and walked me up a spiral staircase that led us to a beautiful candlelit room on a balcony which overlooked the entire restaurant. A million candles lit up the room, my favorite bottle of wine was placed on the table, a personal chef was waiting to cook my favorite meals right in front of us, and a live musician was setting the tone for the most amazing night of my life. Romantic isn't even the word. After dinner we went to his house to celebrate with our families. So much love and happiness filled the room that night and for the first time I really felt our two worlds merging into one. All I can say is, I can't wait to spend the rest of my life with this wonderful man as he continues to sweep me off my feet over and over again!"

I won't deny it, Joe ALMOST ruined it for himself by asking me if I had my nails done, and then proceeded to ask when I was due for a manicure. I mean, is that not the most random question one could possibly ask? When he asked me, I definitely thought he had some tricks up his sleeve coming my way. HOWEVER, Joe covered up his slip up by telling me it was all because his boss was super judgmental, and that he just wanted me to look my best because he knows I would feel out of place if I was underdressed or unprepared (can't deny that either).

Apparently everyone knew about Joe's plan to propose and they all did a very good job at keeping it a secret. I must say, I'm very surprised because we both have such big families with multiple women on each side so I always thought someone would end up spilling the beans. A week or so before Joe proposed, I was telling my sister how weird it was that he asked about my nails, and suggested that he may have some surprises coming my way in the near future. IMMEDIATELY, she went to Joe and said, "She's on to you." After that, the both of them did everything possible to make certain I had NO suspicions whatsoever. They even went as far as staging a fake conversation via text message which she had sent to me. Kudos to you sista!"

Brittany and Joe had never technically gone ring shopping together, but while Christmas shopping at GP, Brittany did a little browsing. With Brittany not being one for surprises, Joe made sure he had her style down ahead of time to be sure he picked something she would love wearing forever. With some research and the help of Gerald, Joe selected a custom white gold A. Jaffe ring with a cushion cut stone and Brittany couldn't love it more! 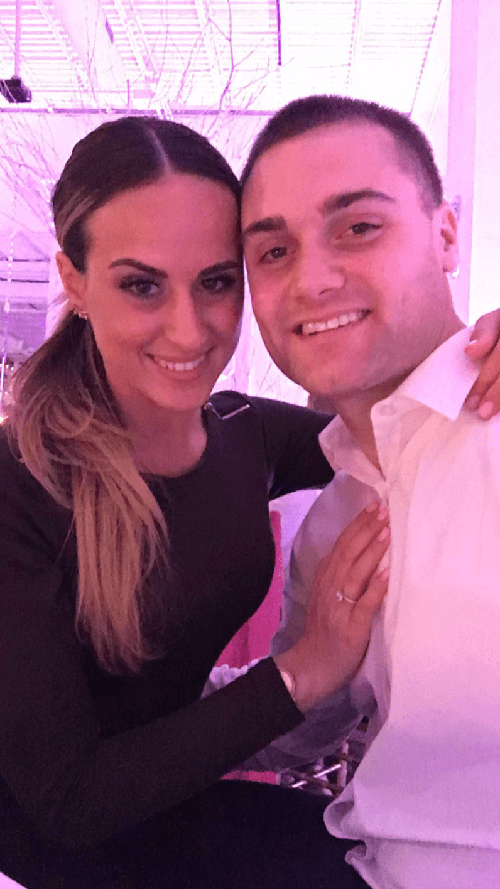 Brittany and Joe plan to say "I do" in July of 2018. Though they already have a lot of the big details planned, such as venue, photographer, and DJ, they still have a lot of planning to do before the big day. "Just when you think a year and 6 months is enough to plan a wedding, THINK AGAIN!" Though there's much to be done, the two couldn't be more excite