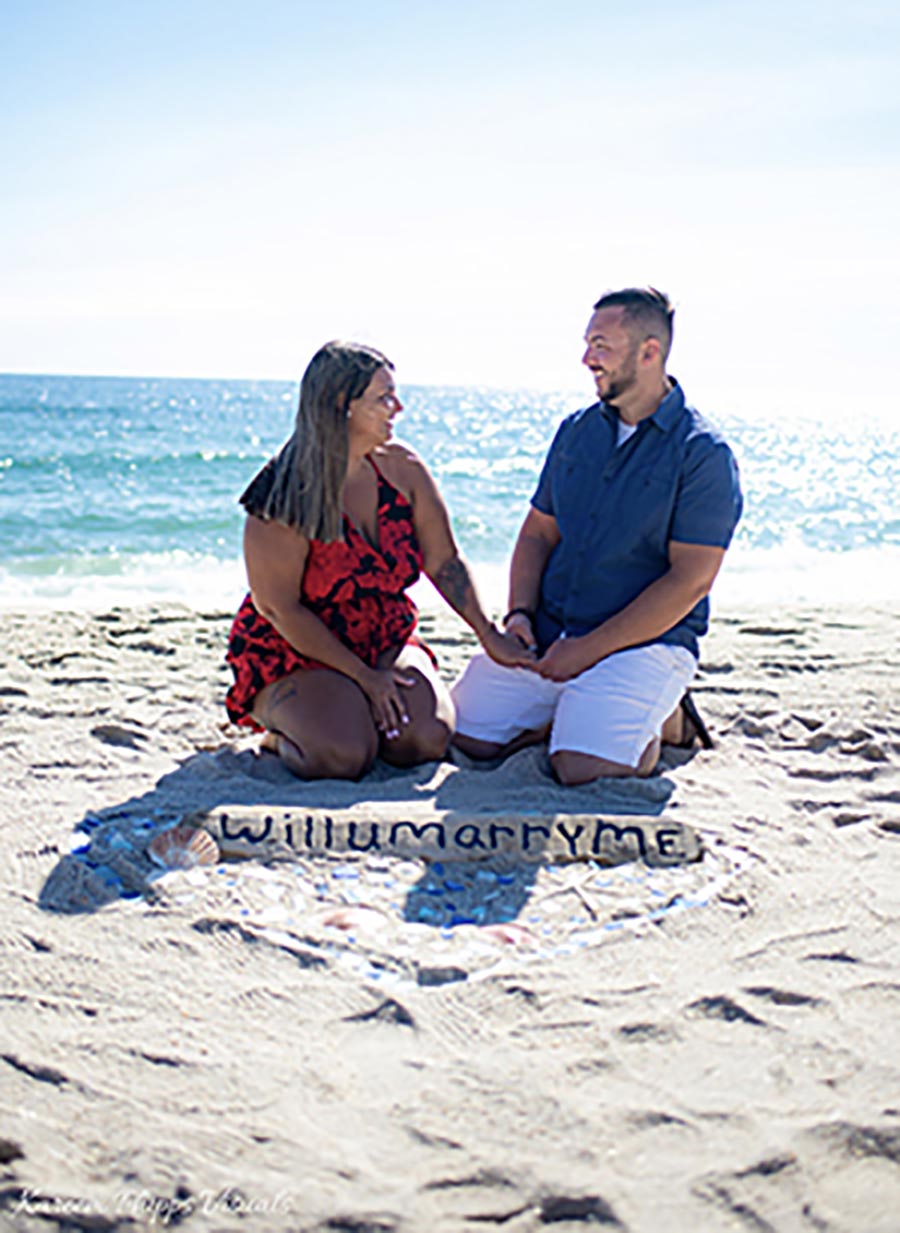 The beginning: Chelsea and Alex met on a dating app. He swiped right, and so did she. At the time, Chelsea was in Jamaica with her best friend. She and Alex talked all day every day for a couple of weeks, until they decided that it was time to officially “meet.” They met up at The Cheesecake Factory in Freehold, New Jersey. And so, they began their first official date. Chelsea and Alex hung out again the next day, and the next day after that. At the time, Alex lived 50 minutes away from Chelsea and he worked until 8pm. They made sure to spend their free time together, which was Friday-Sunday nights. Chelsea told me that she and Alex “lived for the weekends because we knew we’d see each other.” On February 16th, 2019, Alex told Chelsea he loved her for the very first time in a Valentine’s Day card. The couple has been together for almost two years now and, very quickly, they knew this was their forever.

Chelsea and Alex have traveled to Wildwood and Cape May many times as a couple and they have also been to Aruba together. In March 2020, Chelsea and Alex celebrated a major milestone: she moved into Alex’s house which has now become their home. They also just got a standard labradoodle puppy who they named Lucas. Chelsea, Alex, and Lucas hope to move closer to south Jersey by next year, in order to be closer to their families. 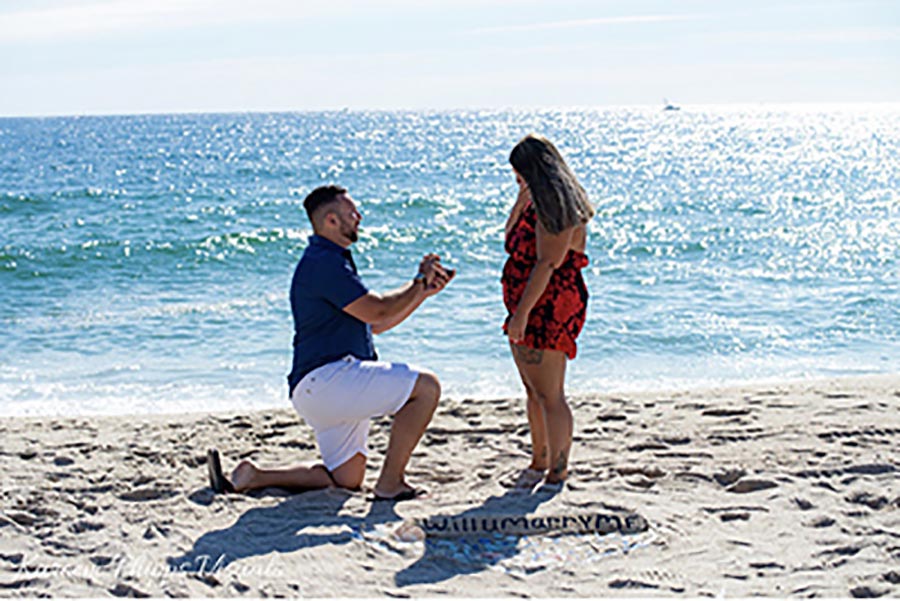 The Perfect Proposal, according to Chelsea: “Alex left the house at 7am. He thought I was sleeping but I peeped my eyes open and was like why the heck is he getting all nice at 6:30 in the morning. I got up at about 8am and called asking where he was. He said he was at Mueller's Bakery in Bay Head getting a coffee. He told me to get ready and he’d pick me up to go sea glass hunting and then go to our favorite lunch spot, The Beanery in Point Pleasant, NJ. I was like ‘hmmmm this is strange!’ So, I got ready with makeup and put on a cute romper just in case! We went to Bay Head Beach on Bridge Avenue, one of our spots. We walked down the beach. It was beautiful: blue water and sunny skies. We were walking and holding hands. He asked me where I saw myself this time next year and then proceeded to ask me if I loved him. He then walked me to this spot on the beach with a wood piece saying ‘will u marry me’ with a heart wrapped around it made out of sea glass. I saw a photographer; I knew it was happening. He proceeded to ask me ‘Chelsea Nicole Breibart, will you marry me?’ As he got down on one knee. I was shaking and my eyes got so watery. I said ‘yes!’ And kissed him and told him I loved him. We then took several pictures and after about 30 minutes, we walked back up to the entrance. Our entire family and close friends were there! I bawled my eyes out and had a mini heart attack. It was everything and more than I have ever dreamed of! It was beyond perfect!” 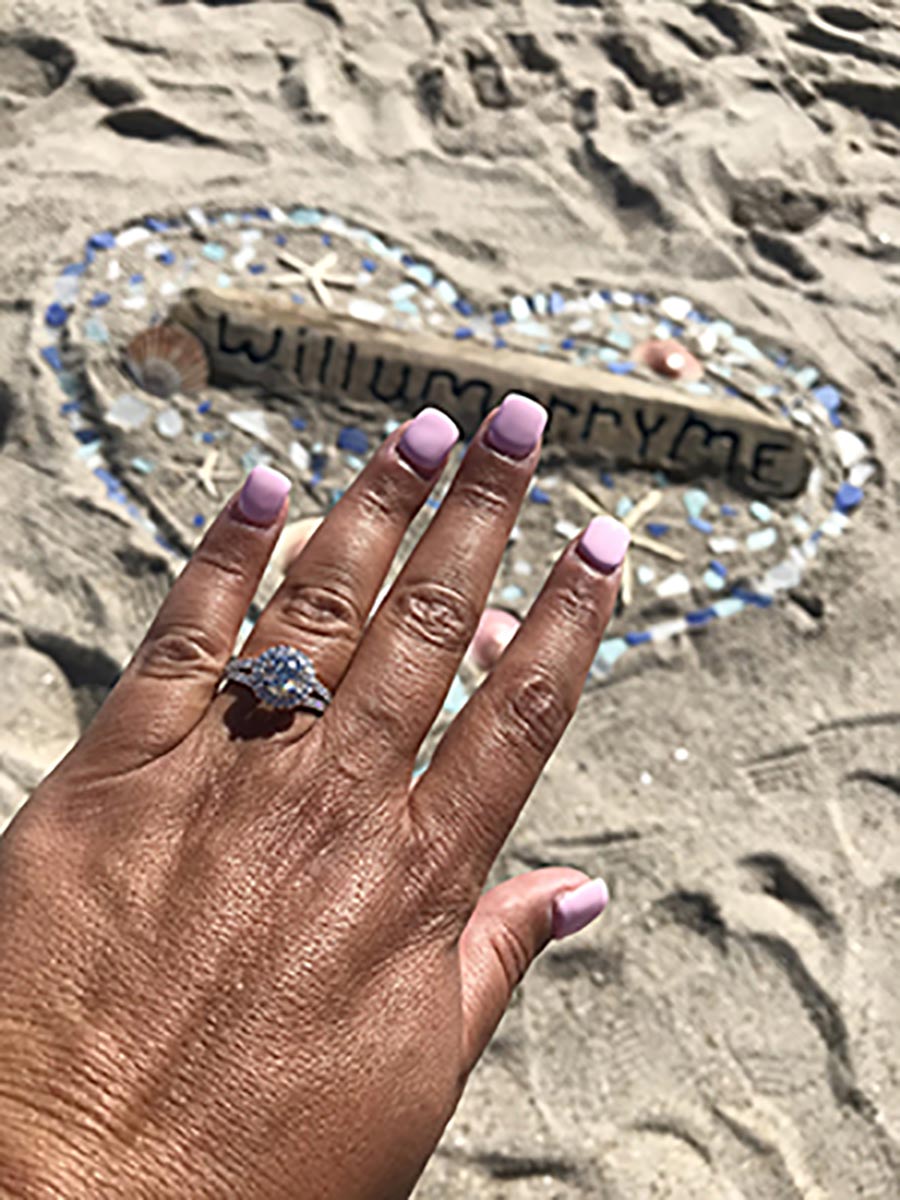 The ring: The ring is a Gabriel and Co. split shank setting. It features a round brilliant diamond surrounded by a single row diamond halo. Chelsea said, “It’s the exact ring I want! Everything and more!”

The future: Chelsea and Alex have set a wedding date! They will be married at the English Manor in Ocean Township, NJ on December 19, 2021. The couple is planning a festive and Christmas-themed wedding. Having been married in December at that same venue, I can safely say that the English Manor is MEANT for winter weddings. Congrats to the happy couple!