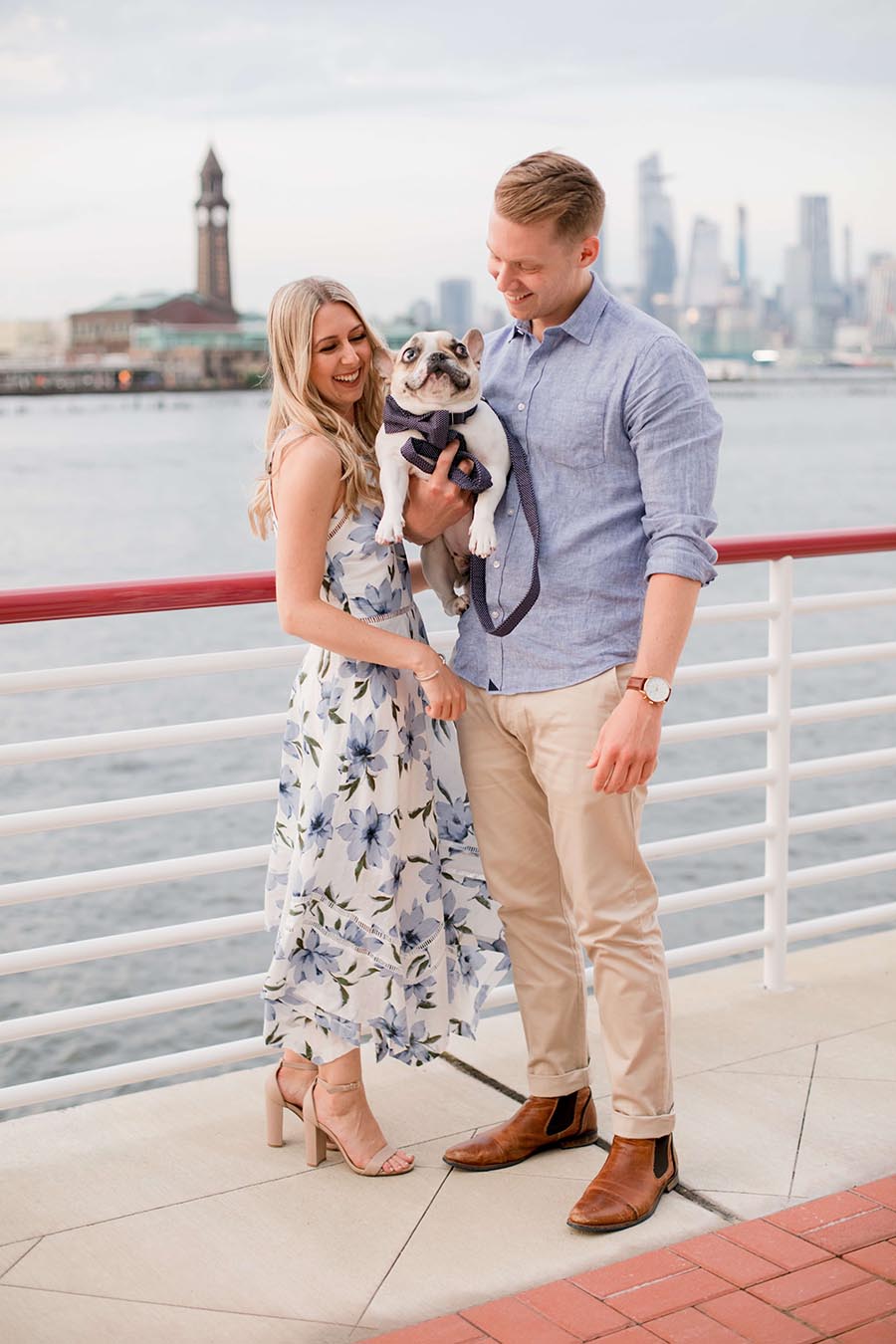 The beginning: Erik and Courtney met on Bumble. Courtney remembers swiping through Erik's photos and having one particular picture catch her eye. Erik was wearing red pants with a blazer and sipping whiskey. "Hmm…red pants…that's a bold move," Courtney thought to herself. So, she swiped right and started a chat with Erik, making fun of the red pants to get the conversation started. The two chatted on the app for a while, then got each other's numbers, texted, and decided to meet up. Their first date was at Aria West Village on Wednesday, April 6th, 2016. They talked for a few hours over appetizers and drinks and at the end of the night, Erik got a cab for Courtney. He took the ride with her to her apartment in Midtown East to make sure she got home safely. He gave her a hug, and then he took the cab back to the PATH station to venture on home (he lived in Secaucus, NJ at the time). Courtney was shocked, thinking it was such a gentleman thing to do.

The couple then had their second date for which Courtney was extremely late on account of work. Poor Erik waited at the bar until she arrived. To this day, he still makes fun of the fact that he thought she was blowing him off! On that night, Courtney and Erik shared their first kiss. About a month later, Tuesday, May 24th, 2016 to be exact, Erik asked Courtney to be his girlfriend. She said yes, and they celebrated at The Roof.

The couple has been together for over three years now and during this time, they have experienced career moves and promotions. They have moved in together and currently live in Jersey City right on the waterfront with views of the Empire State Building and Midtown. They have vacationed in St. Thomas, Cancun, St. Louis (where Erik is from), and Philadelphia (where Courtney is from). They have adopted a French bulldog named Finn who is a cutie, but super stubborn and definitely tests the couple's patience. They have also enjoyed spending summers down in Cape May, New Jersey where Courtney's grandmother has a shore house. Finn especially loves it there because of the dog friendly places like wineries, breweries, and the beach! 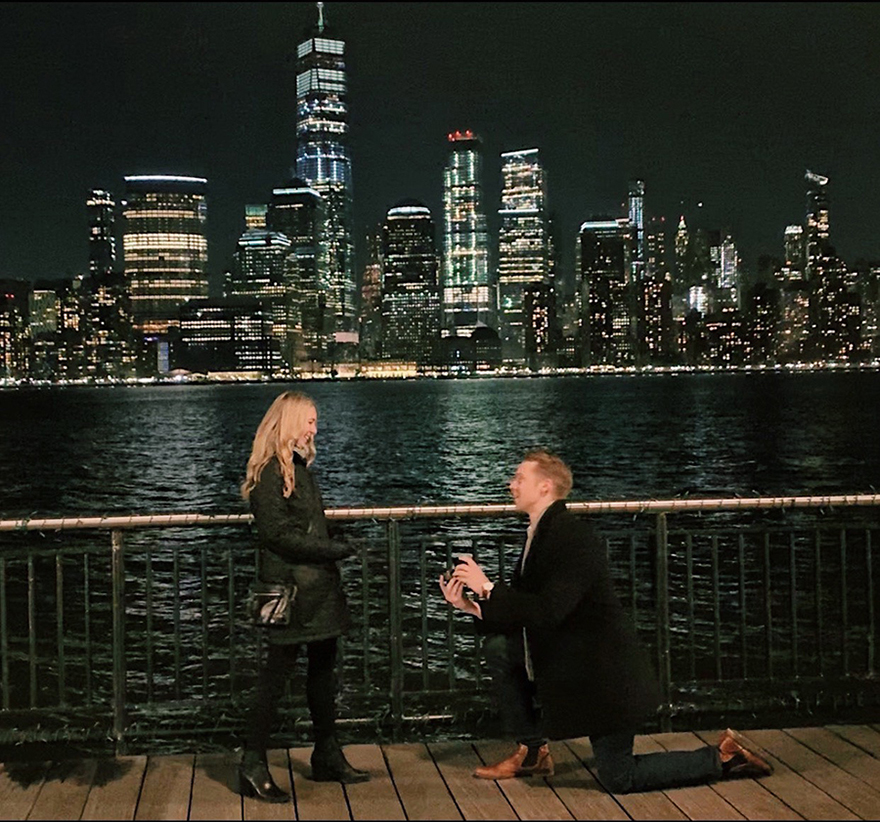 The Perfect Proposal, according to Courtney: On Saturday, March 9th, 2019, there was another reason for the couple to celebrate. Courtney explains, "I knew it was coming soon…I thought the summer in Cape May, but I was completely shocked when it happened in March. I was not expecting it then. Erik made reservations at Battello, the waterfront restaurant with Manhattan views. We were seated in the back room with the string lights; it was very romantic and the dinner was fantastic! Erik then suggested that we grab a drink at The Rooftop at Exchange Place. On the walk there, we stopped by the Exchange Place Pier. It was very cold, so no one was on the Pier but Erik said, â€˜we should get a picture.' The city was extremely crisp and it was chilly but no one was there to take our picture. I kept saying how cold it was and how it was fine. We could have someone take our picture upstairs at the bar. But then, a kid and his girlfriend were walking down the pier with a Trade Joe's bag so Erik ran over to him and was kinda whispering. I thought nothing of it. Erik came back and kind of pushed me so I was in the middle of the Freedom Tower. He grabbed my hands, and then started saying how much I meant to him and then in my head I was like â€˜OMG IT IS HAPPENING.' I blacked out on the rest of his little speech, but he got down on one knee and asked me to make him the happiest man in the world and to marry him! I of course said yes! Erik then got up, shut the ring case (haha), and ran over to the kid! He totally forgot to put the ring on my finger! The kid had the whole thing on video - it was extremely cute! He even was like â€˜Let's see the ring man!' So he did a second video of Erik putting the ring on my finger. It was ABSOLUTELY BEAUTIFUL! I remember being so excited and shocked and was like â€˜WAIT - when did you ask my dad? Do my parents know? Is that why my mom has been avoiding my calls, and my sisters my texts?' Erik laughed and told me he would go over all the details leading up to the proposal once we got upstairs to the bar. When we got to the rooftop, I glanced over and saw my mom, dad, and two younger sisters (Heather and Emma) sitting on the couch and I started tearing up. I was so shocked they were there to celebrate with us on the night of the proposal. I then glanced across the room and both Erik's mom and dad along with his older sister (Jacquie) and her boyfriend were there as well! Erik coordinated the whole thing - for both of our families to be there to share this special time with us. It was also the first time our families got to meet in person and we celebrated the rest of the night! It was perfection." 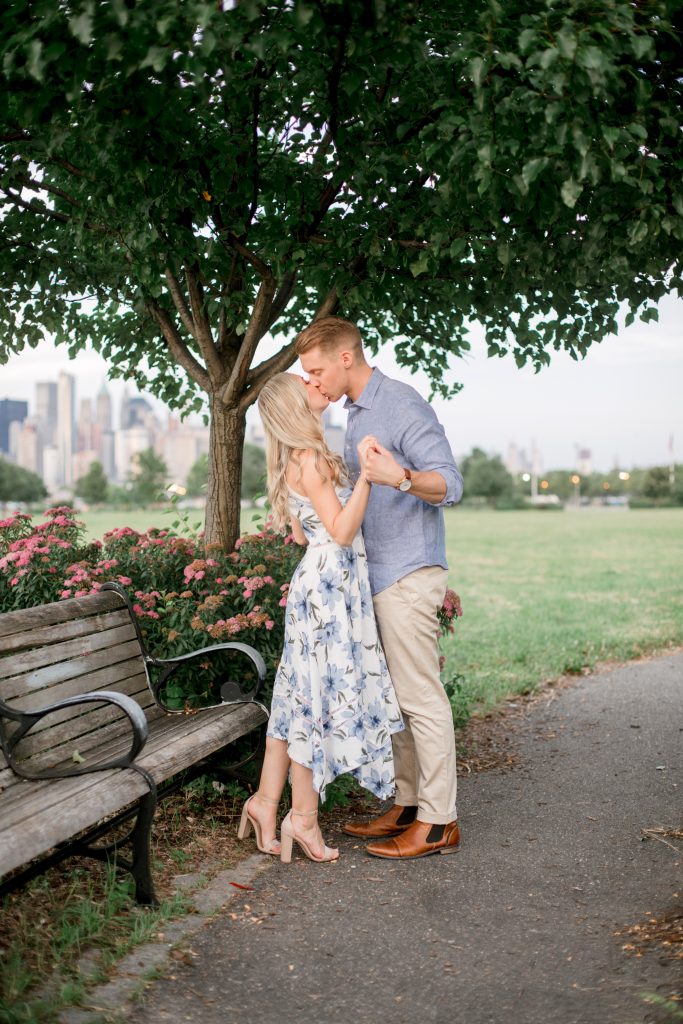 The ring: Erik chose a micropave setting to showcase a 2ct Round Brilliant Diamond. Courtney exclaims, "It is beautiful!"

The future: The couple has officially set a date and booked a venue. They will tie the knot on Saturday, May 30th, 2020 at the Pen Ryn Mansion in Bensalem, Pennsylvania. Congrats Erik and Courtney!