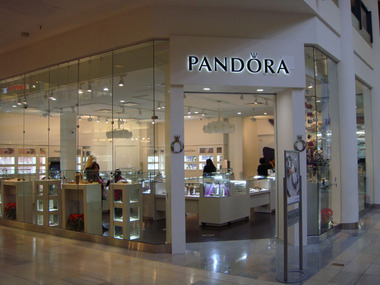 STATEN ISLAND, N.Y. — One of the Staten Island Mall's most popular stores recently completed an expansion that makes it, perhaps, the largest Pandora store in the entire country. But it wasn't always that way. Now located at Center Court, the Pandora shop has drawn thousands of charm-hungry customers looking to personalize a bracelet or necklace over the years. But prior to the store's renovation, the approximately 675-square-foot location was so small, folks had to wait up to 30 minutes on line outside during the holiday season to complete their shopping.

"This (past holiday season) we were able to get them in the store, let them walk around, take the names, and I was able to let a lot more people help them because of the space," said store owner Jerry Amerosi, who also operates Gerald Peters Gold Mine in the New Springville-based shopping hub.

Amerosi noted the store was more than doubled in size and now rests at 1,650-square-feet.Construction was supposed to be done at the end of October, but Hurricane Sandy held up completion. Work finished up in mid-November, said Amerosi. "November took a hit in dollars and gross sales and all that good stuff, because we were closed for so many days," he explained. But December was a runaway hit. Shoppers were able to browse the many jewelry items in the store, and when it was really crowded, the wait outside lasted only about eight minutes. "It was a lot better for the customers. They had a much better experience," said Amerosi. It also helped that the owner hired more help. He now employs more than 25 part-time and full-time workers at the shop. They played a major role in raising $2,000 that was donated to the Carl V. Bini Memorial Fund - established to honor the Staten Island FDNY firefighter lost on September 11, 2001 - aiding the nonprofit organization's support for the borough's Sandy victims.

Charms typically range in price - as low as $25 - and can soar into the hundreds of dollars category, depending on the type of metal. They come in many different styles and colors, such as silver, wood, and gold. Charms can look like letters, animals, hearts, rings, and more. Bracelets also vary. Pamphlets containing prices and styles are available throughout the store.

Lisa Mando, who brought her daughter Brianna to the store, said Brianna has about 10 charms. "She likes dogs," said Ms. Mando, who recently purchased a dress charm for her daughter, who admitted her friends really like the decorative pieces of jewelry."They all have meaning," said sales associate Debbie Freglette. "It's an easy gift-giver. Once you have the bracelet, you can always buy a charm." Charms and charm bracelets are the store's big sellers, but there was a recent increase in Pandora's sale of rings and earrings. "There is really nice jewelry that Pandora makes inexpensive, so prices are really light," said Amerosi. With the smaller store, consumers couldn't see all the items. Now bigger and featuring more inventory, people can easily check out the rings, necklaces, watches, and more. "It's become more of a jewelry store than a bead store. We're evolving. I think it's going to be a good year," said Amerosi.