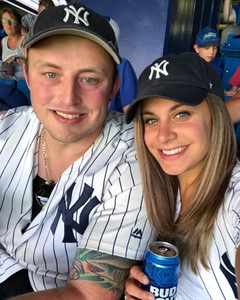 The beginning: Gina and John first met through a mutual friend, Jeanna, when Gina was in grad school. Jeanna used to work at a bar in Queens where John used to bounce. Each time Gina would see John, he'd be working, and she would sort of blow past him like she owned the place. I mean, she did know the bartender! Their story gets a little more interesting, however, and it spans over the course of about six months, starting in the fall of 2015. Gina and John were on an Atlantic City trip with a group of their friends. Late at night, the group split up to go back to their separate hotels and rooms, but Gina and John (both lost) ended up running into each other. All wasn't lost though - they ended up kissing in an elevator! For about three months after that, Gina and John didn't speak to or see each other. The bar John bounced at even closed down.

The next time the two were together was on another group vacation, but this time it was January 2016 and the group was celebrating John's birthday in the Poconos. Like the last vacation, Gina and John ended up kissing. Unlike the last trip, the two continued seeing each other. It took John about four months to acknowledge that he and Gina were â€˜boyfriend and girlfriend,' which finally happened because their friends started calling them â€˜John and John's girlfriend.' He had no choice but to give in. Gina joked, "how romantic?" They were on their way home from a Yankees game in May and Gina asked if it bothered him that his friends said that. John responded with, "Well you are, right?" ... The rest is history, and John has definitely stepped up his romantic game. Since he and Gina started dating â€˜officially,' he encouraged her to leave a low paying job that was seriously disrespecting her, and got her the laptop she needed to update her resume and switch to her current job at Mount Sinai. Since the job switch, Gina has been promoted twice and has plans to officially manage the research facility where she was hired. John works managing a security team for Target in Westbury, and is hopeful for a career advancement there soon as well. Together, the two have taken many vacations, including a cruise through the Caribbean. They also love the Yankees and are going on their third year with partial season tickets. Gina said, "John's a diehard- tattoo and all!" The couple rarely misses a local country show and continues to travel to see concerts and go to ballgames.

The Perfect Proposal, according to Gina: "Leading up to the proposal, I had a feeling something may have been coming but I wouldn't have guessed he'd do it the way he did. Because of his job in retail, he is always working on the holidays and I go home to see my family since he won't be around for much of the festivities. We have never spent a holiday together, and this would have been our fourth Christmas 300 miles apart from each other. My parents invite my whole family to their house on Christmas Eve, and it has always been one of my favorite nights of the year so it always made me a little upset that he could never come experience it with me. This Christmas Eve though, I was standing around and talking to my dad and some of my cousins when I heard someone say â€˜Merry Christmas' … I turned to look because I couldn't believe it but it sounded like his voice. Sure enough, he was walking in from the front door and I just started crying because he was THERE. I didn't even have time to think about what he would be there for before he took one knee. My parents, my sister, and my brother in law were the only ones who knew… so when it happened it was a huge surprise for EVERYONE (picture like 25 screaming Italians). I don't like cliches and technically I guess a Christmas proposal would qualify, but for us I think it is so much different. I've always been upset that we can't spend my favorite holiday together, and he planned his proposal around the fact that we could this year. He worked from 5:30am until just after noon, then got into a car with his mom and drove the 6 hours up to Rochester to surprise me. It was the best surprise ever!"

The ring: Gina was very specific that the ring have 6 prongs - not 4. So what did John do, he got her exactly what she wanted - a stunning 6 prong classic diamond setting featuring a beautiful Brilliant Round Diamond. The ring was everything Gina imagined and more! 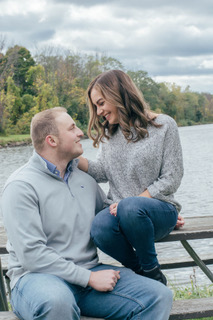 The future: John and Gina are still working on finalizing their wedding details. They are thinking of waiting until the fall of 2021 but might cave for winter 2020. The only sure thing is that the wedding will be held in Rochester, NY.

We are so happy for the two of you and can't wait to see what's to come!