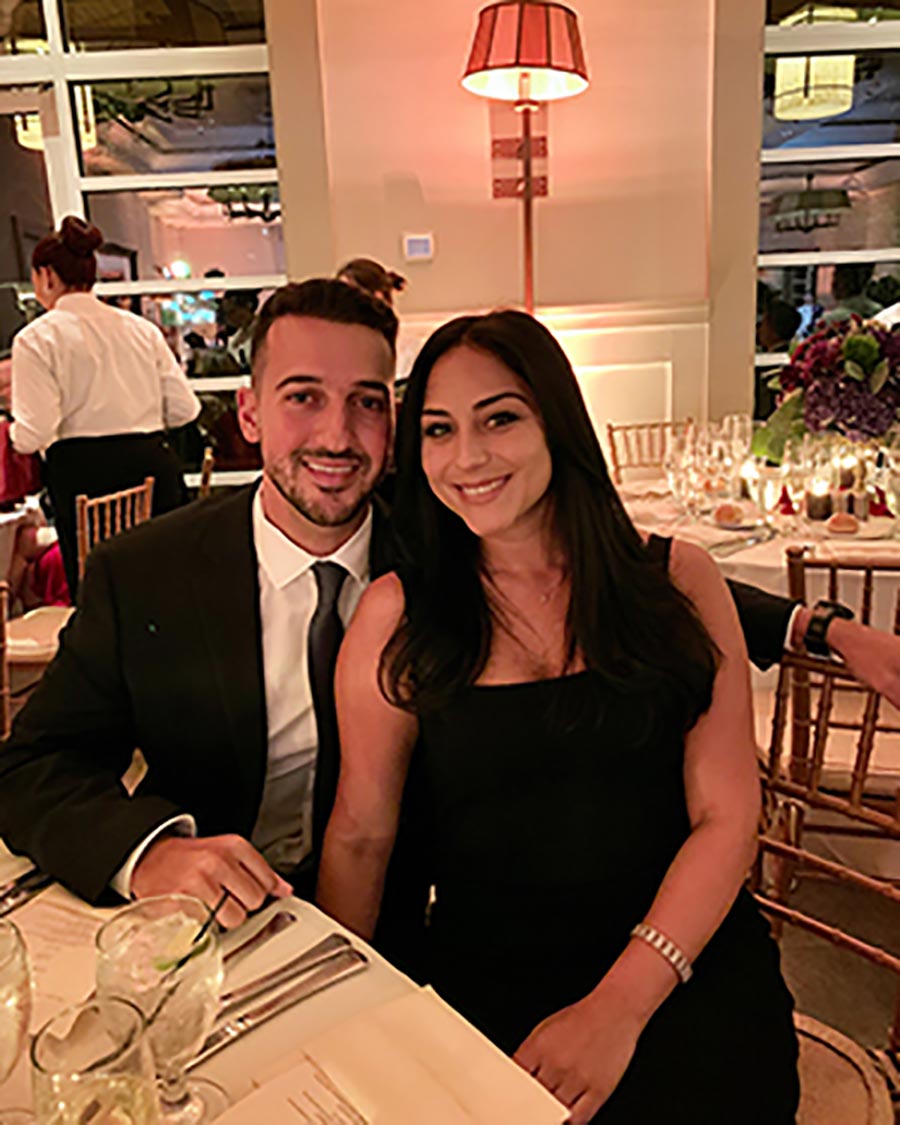 The beginning: Jessica and Nick met online on a dating app called Hinge. Nick commented “yup” on one of Jessica’s food posts. “So romantic,” Jessica joked. But the couple went from “yup,” to talking for two weeks, to actually meeting. Jessica and Nick chose to meet at a place in the city called Cedar Local. It’s a cute downtown spot near Jessica’s work. There was lots of conversation flowing (and lots of drinks too) and they didn’t want the night to end. They went to a couple of different bars but they ended their night at a bar called Lovelace. At this point, it was 2:00 in the morning and Jessica and Nick were the only two people left in the bar. The bartender came up to them and asked them how long they'd been married for. When they said they weren’t married and that they were actually on their first date. The bartender was shocked and he offered them a round of shots on the house. Before the first date was even over, Nick made sure that he and Jessica had another two dates on the calendar. He just couldn’t wait to see her again.

Since that night, Jessica and Nick have had plenty of fun times together and have now been dating for a year and a half. They had an awesome trip to Miami last October where they had delicious dinners and amazing visits from family members who actually live in Miami. The weather was absolute perfection and the couple laughed, smiled, and truly enjoyed themselves the entire time. Jessica said that Nick has been her biggest supporter in all that she does. In 2019 she achieved sales goals that led her to Elite Performer with the Hyatt Corporation. Nick cheered her on from the beginning. He was so sweet at her hotel gala when it was announced, and he was standing in front videotaping the whole thing, smiling from ear to ear. Jess explained that she feels, “so blessed to have someone who supports me and believes in me in all that I do.” Although the couple had to cancel many planned vacations and getaways due to COVID, Jessica said that “being quarantined together for months only brought us closer and made me realize even more how much I love him.” It is safe to say Nick felt the same way. 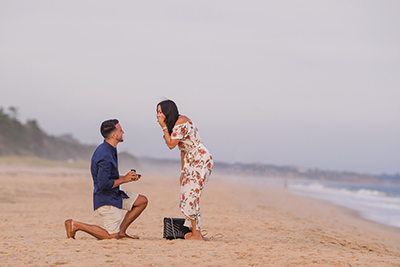 The Perfect Proposal, according to Jessica: “Nick planned a surprise trip to Montauk! I didn’t think much of it when he told me because we briefly spoke about maybe planning a trip a few weeks prior. The past few months have been crazy to say the least and since all our trips had been canceled, he wanted something else to look forward to together (or so he made it seem like he was doing it because our trips had been cancelled!) He booked us two nights at Gurneys in Montauk in the most amazing room with the beautiful balcony overlooking the ocean. When we got to the hotel our room wasn’t ready so we sat on the beach to wait. It was the most beautiful day, and I remember saying to him that this would be a perfect place for a proposal! When our room was finally ready, we headed up and he mentioned dinner was at 7. As I’m getting ready for dinner I was frustrated because I forgot my hairspray and eyeliner and was trying to pick something to wear (typical girl problems lol). Nick kept saying to wear what made me feel most beautiful. Now looking back, I know why he said that, but at the time I was like what are you talking about, help me pick something! He was very adamant about getting a picture on the beach before dinner. I finally put a dress on and I remember him looking at me and saying wow you look beautiful- wear that. Little did I know that it was the most perfect dress I could’ve ever worn. As we walked on the beach I was jokingly saying ‘babe how far will you make me walk for a selfie! My dress is dragging in the sand!’ I then remember seeing a woman on the beach with her husband staring out into the ocean, but holding a large camera. Nick was like what are these people staring at? I remember thinking it was a little odd. Then as we continued to walk, he stopped and said let’s take a selfie. After we snapped a few photos he put his phone away and stood in front of me saying ‘I love you and I want to spend my life with you.’ I remember saying back ‘what are you doing? Is this happening?’ He said ‘yes this is happening’ and then turned me so that my back was to the ocean, making for the most beautiful proposal photo I didn’t know was being taken. He told me he just couldn’t wait until 2027 to marry me (our inside joke) and that he loved me so much he wanted to spend forever with me. I remember shaking because I was so shocked! By the end of it I was absolutely speechless, and the woman and man with the camera came running up to us saying ‘congrats Nick and Jess!’ He had hired them to take photos of the proposal. I couldn’t believe he pulled this off during a pandemic while we were home together! After we took photos, we headed back to the room that had been filled with roses, photos of us, and champagne. We called all of our family and friends who were so happy for us. After speaking to our family and friends on the phone, they had all asked for pictures, and then it hit me that I had none to share on either of our phones. When we showed up to dinner, there was a large printed photo of the proposal taken by the event planner of the hotel with our engagement date. It was simply perfect. He truly thought of everything. From beginning to end it was the most amazing day of my life.”

The ring: Jessica's ring holds a stunning round diamond. The setting is a 3 sided pave mounting with diamond prongs. Nick had a good idea of what Jessica wanted, and with the help of Gerald Peters he was able to custom design the ring of Jessica's dreams!+ 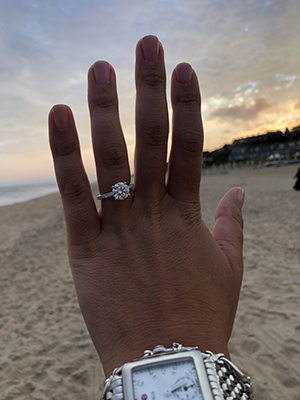 The future: Though Jessica and Nick have been enjoying being engaged, they’ve still found time to begin wedding planning. Though no concrete details are set yet, they booked three wedding venue tours for October 2020. They also (fingers crossed) are hoping to get married in the fall of 2022. Congratulations Jessica and Nick! We are so happy for you. 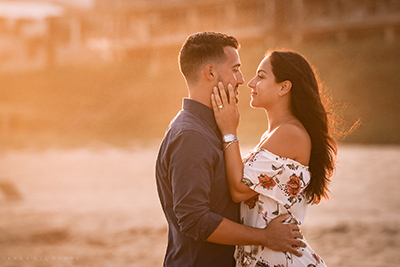