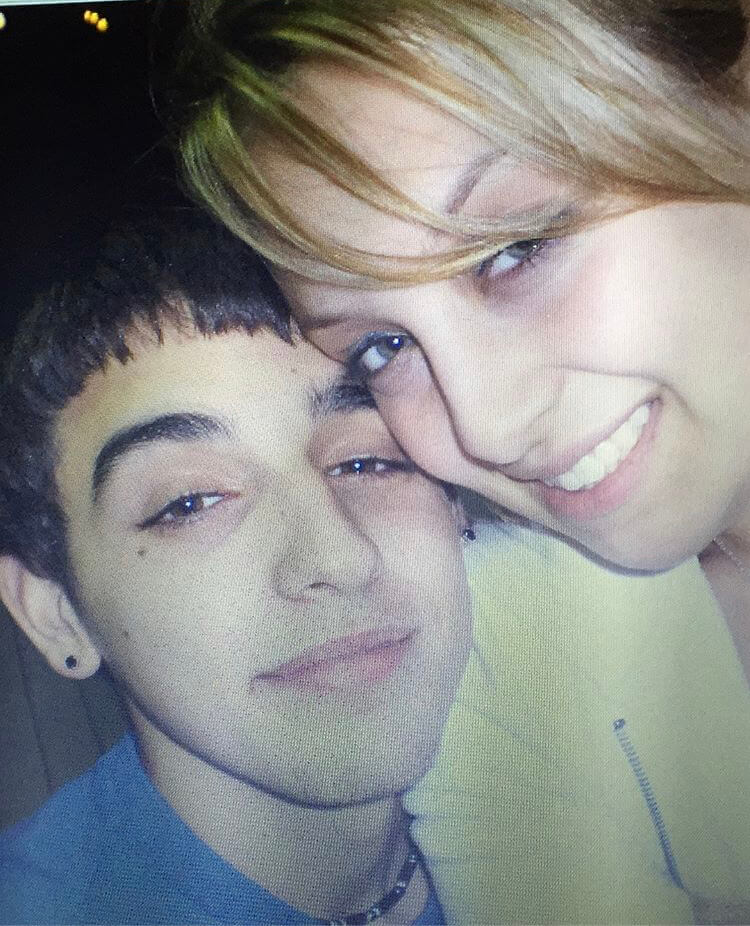 The beginning: Anthony and Maria began their story 10 years ago when they were about 15 or 16 years old. Maria's best friend Victoria (now her future maid of honor) was in Anthony's math class and introduced the two one day in the hallways of high school. Soon after, Maria and Anthony started hanging out together in school, which led to them hanging out outside of school. After a few months, Maria eventually worked up the courage to tell Anthony that she liked him, as more than just a friend. This took place in the hallway during Maria's Spanish class where her teacher yelled at her to get back into class! Maria left Anthony speechless, but moments later she received a text from him saying he felt the same way. A few months later, he officially asked Maria to be his girlfriend and they dated for about 3 years. When the two were around 19 years old, they broke up for some time while remaining on and off for the next two years. In that time, though they had gone their separate ways and though Maria's daughter, Nicolette, was born, the two never stopped thinking about each other. They never stopped missing each other. They never stopped loving each other. Two years after Nicolette was born, Maria ran into Anthony's mom and dad in the supermarket. A rush of emotions swept over her, and over Anthony's parents. As Maria was getting into her car, Anthony's dad, Jerry, tapped on her window and said, "Maria we truly miss you, we all still love you; things aren't the same. I know Anthony misses you too." She said to Jerry, "It's different now. I have a two year old daughter and I don't know how he would feel." Jerry replied: "The son I raised would love your child like his own" and that â€˜hit home' for Maria. The last thing Jerry said to her was "If you can or are interested please reach out to him. I love you." Confused and nervous, Maria did reach out to Anthony and within 24 hours, he replied that he'd love to â€˜grab coffee and catch up.' Maria and Anthony saw each other for the first time, after a long time, on December 23, 2017, and they, along with Nicolette, have been inseparable since. 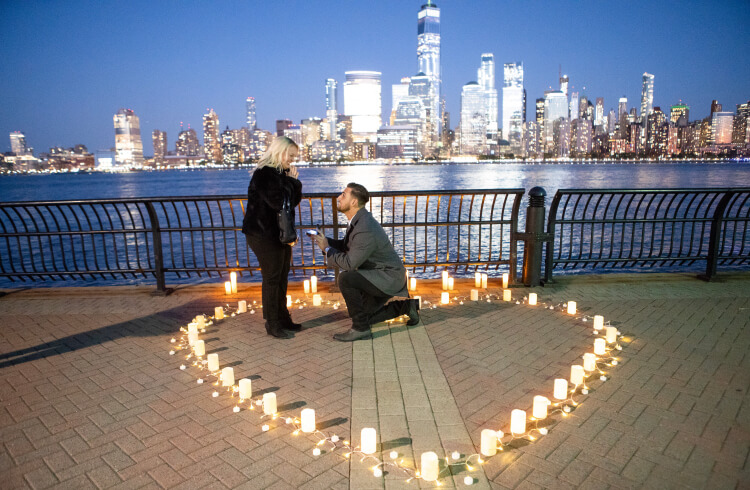 The Perfect Proposal, according to Maria: Anthony had started working night shifts and we knew our time was going to be limited with different work schedules. So he had planned a dinner in Jersey City (I had been begging him to go because the view of the city is unreal). I had my best friend's son's baptism that day so we were all dressed up for the occasion. He was very calm and I truly had no idea. He always told me it was too soon and we have time, so I didn't think anything about it. Before we pulled up to the restaurant Anthony pulled over, saying he had to use the restroom, and left me double parked outside of a bank for 15 minutes. Little did I know he was at a corner coffee shop getting a microphone hooked up to him. He had hired an entire team to video and photograph our proposal. We had started walking towards the restaurant and from a distance we saw candles. He said â€˜let's go take a selfie by the water.' Thinking nothing of it, I said alright, and as we walked over a guitarist started playing our song â€˜Perfect,' by Ed Sheeran. There were candles in the shape of a heart. He took me in the middle of the heart and that's when he started talking to me about spending our lives together. As soon as he got down on one knee our family came out and started cheering! I was so surprised! After he put my ring on, he went and grabbed my daughter and brought her into the middle of the heart. He asked her if it was okay to marry me and if it was okay to be her daddy and gave her her own special ring that Gerald Peters also helped out with. It's a beautiful heart ring with a pink diamond in the middle. And he promised to always be here for us both. It was extremely emotional and the most amazing experience of my life. My daughter and I were beyond thrilled and so were our families!" Maria went on to say that "The moment was so surreal. To this day every time I watch the video I still cannot believe my fairytale dream came true." 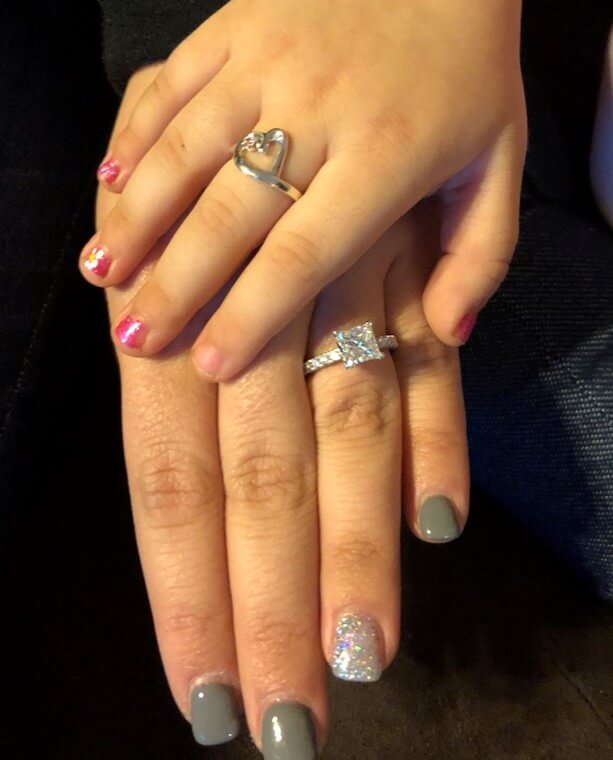 The ring: After Anthony proposed, Maria said that, "Looking down at that box with a light shining down on my beautiful princess cut ring I had to pinch myself. I couldn't believe it was real and to have the ring I've always dreamed about! He [Anthony] did an absolute perfect job with a HUGE help from the team at Gerald Peters. They were so kind to him, didn't pressure him, and helped him pick out the most amazing rings I have ever seen!" The ring is a Gerald Peters setting set with a beautiful princess cut diamond. Anthony created Maria's dream ring! 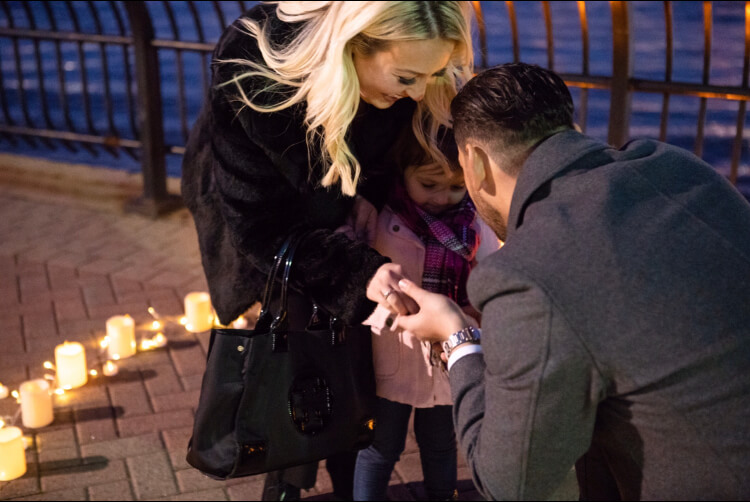 The future: Since the proposal, Maria and Anthony feel as though they have learned more about each other all over again, even though they feel as if time has stopped and nothing has changed. They matured, they realized what they both want in life and they are striving for a future for their family. Since the proposal, Anthony has gotten an amazing job offer that he has graciously accepted. Maria and him are currently still looking at venues and planning while enjoying their engagement, which they plan to celebrate at their engagement party on June 21st of this year! Congratulations to the two of you!