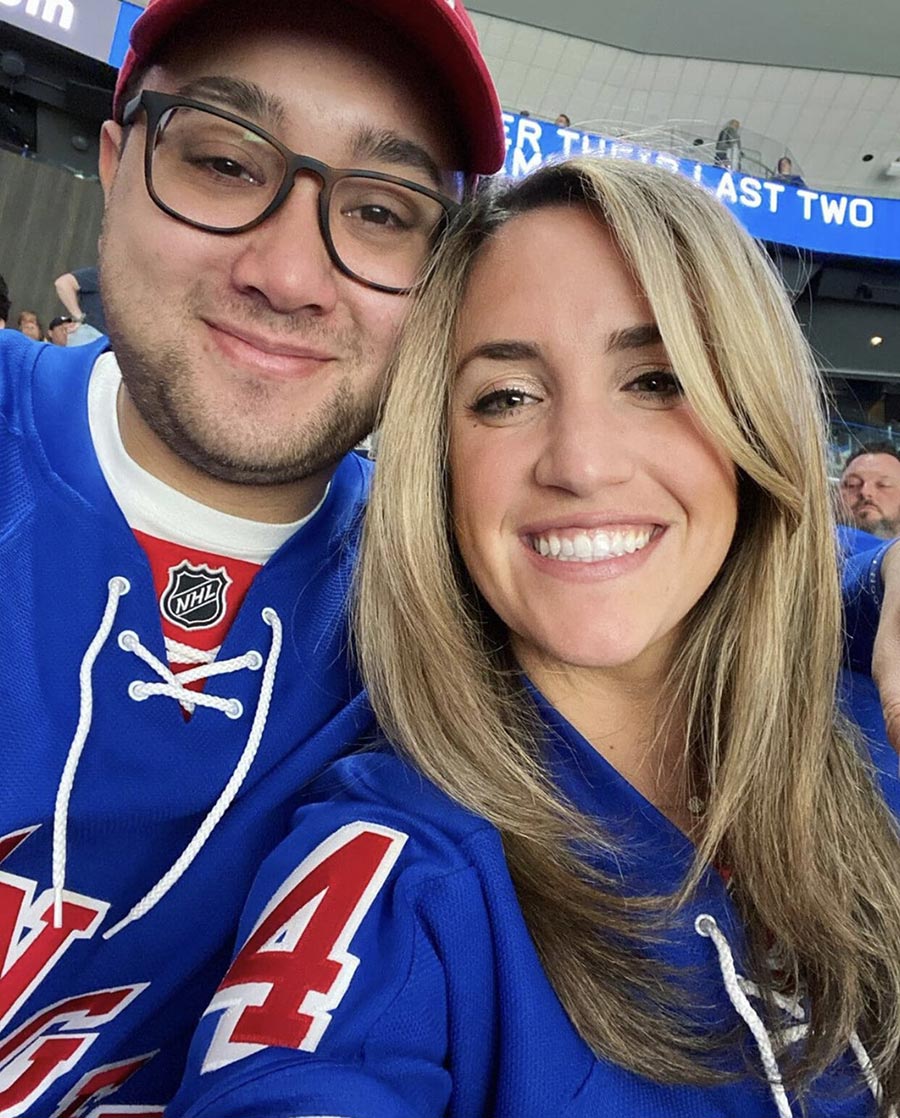 The beginning: In January of 2016, Daria moved to Hoboken. She was at a pregame and someone she went to college with had invited Matt over too. Matt and Daria didn't get to know each other well that night, but it was the first time they met. From there, their friend groups kind of merged - this led to the two seeing much more of each other. A couple of months later, during the summer of 2016, Daria and Matt went out on a few dates in Hoboken. It didn't really go anywhere, well, initially anyway. Still, they kept in touch here and there. Almost two years later, Matt texted Daria "Sunday Funday?" She and a friend met up with him and one of his best friends. This Sunday Funday sparked something new, and Daria and Matt started spending a lot more time together - going to brunch, going to Rangers games, going out at night, going to a wedding together…things like that. After about a month of seeing each other, the pair was at a New York Rangers game where Matt officially asked Daria to be his girlfriend. She said "yes."

As a couple, they've celebrated new jobs and exciting promotions together. They've also taken tons of trips - road tripping through California, hitting San Diego, Malibu, Santa Barbara, San Francisco and Sonoma. They did a trip through Western Canada, skiing Whistler and Lake Louise and catching two Ranger games while out there. They've also gone to Atlanta, St. Louis, and Hilton Head - where they typically spent most of their time eating and checking out local breweries. After about a year of dating, Daria and Matt moved in together and, according to Daria, this is one of her most favorite milestones, other than getting engaged of course, because they were so excited to start a new chapter of their lives together! After about two years of dating, Matt got down on one knee, but they have also decided to get a dog together (they won't pick him up until the end of this year though)! How exciting!

The Perfect Proposal, according to Daria: 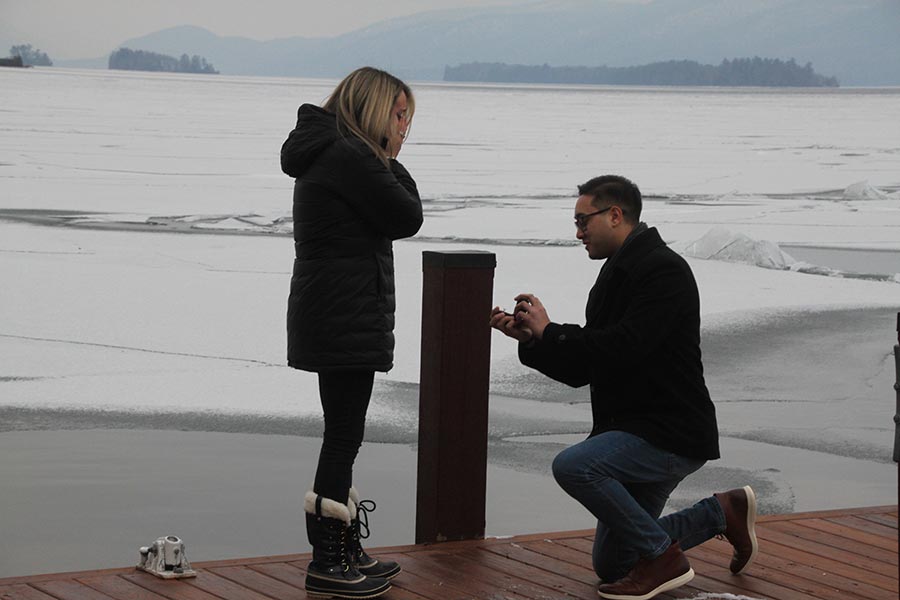 "First of all everyone was so calm and collected all day! I never had any idea it was coming at all. He had told me a couple months ago that it probably wouldn't be able to happen for another year and a half (which I got because we have SO many weddings and trips planned this year). We were staying at Matt's aunt and uncle's house right on the water in Lake George. We started that Saturday by skiing at Gore Mountain with my parents and his mom stayed home, unbeknownst to me, to decorate for the post-engagement celebration. He told me I had to look nice for dinner because we were celebrating his aunt's birthday and make sure I'm ready early. I had been begging to go down to see the lake since we got home from skiing so it was finally time once we were all showered and ready for dinner. His uncle needed to go down to take pictures of the backyard for insurance as they're remodeling their new house (made sense to me). We (my parents, Matt and his uncle) go down by the lake and I'm just blown away by how beautiful it is. His mom and aunt are down there checking out the boathouse area so we're all admiring how amazing the view is. I asked Matt if we could take a picture - so we walked over to the best spot on the dock. He had me look at the pictures to make sure the view was right. And then as I started walking away, he grabbed my arm saying "wait a minute" and as I'm turning around I see him getting down on one knee with the ring in his hand. I was so blown away that I could barely stand and ended up down on my knees with him. I just remember hugging him and crying and thinking this can't be really happening right now. One of the most special parts of the entire thing was that when I turned around I just automatically ran right into my mom's arms, followed by my dad and his mom - having such an intimate engagement moment with our immediate family." 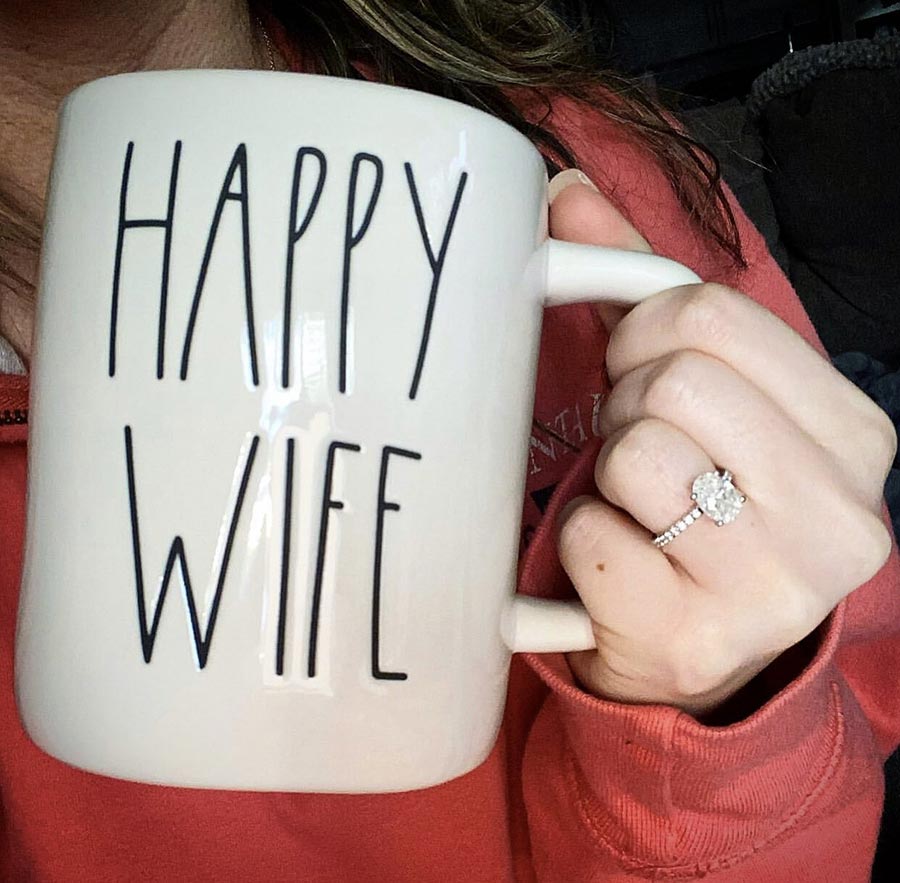 The ring: It's an beautifully shaped Oval Diamond mounted in a stunning diamond setting. Daria told us that "It's more beautiful than I could've ever imagined!" 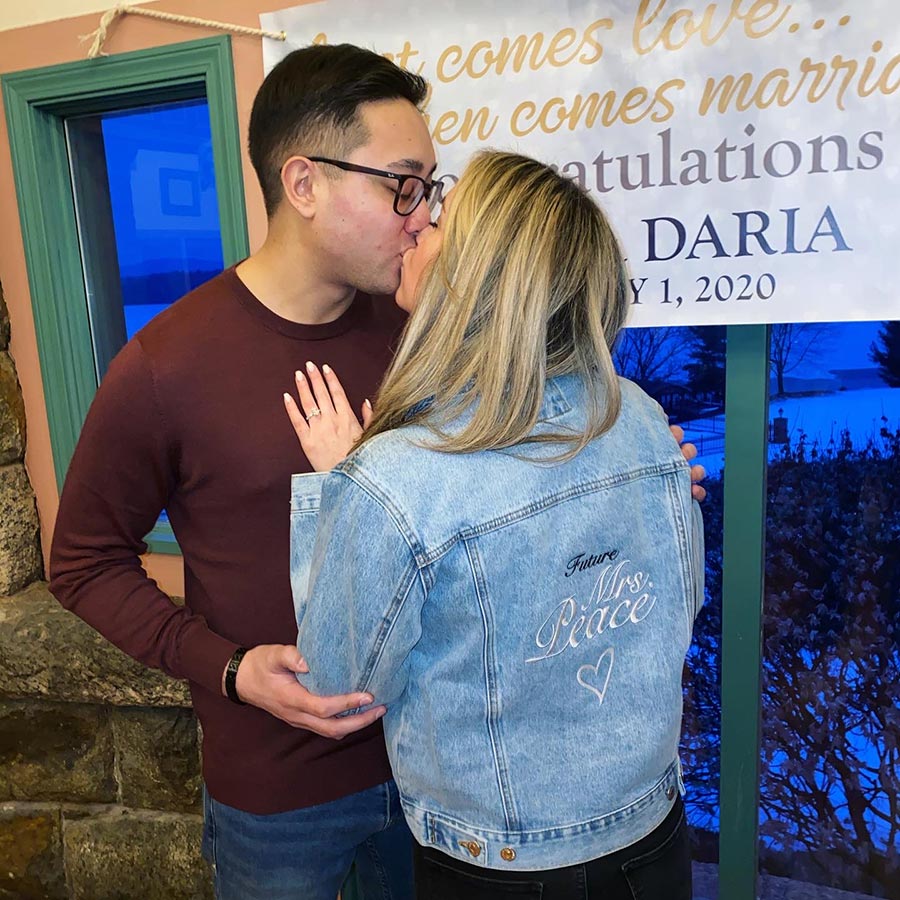 The future: The future Mr. and Mrs. Peace are planning to get married in New Jersey and are shooting for a winter 2021 date. Matt even surprised Daria with an appointment at a venue the couple has always loved. We wish you two the best of luck - and happy planning!