Samantha & Tom: The Proposal in Alaska

The beginning: Samantha and Tom met back when they were in high school in 2010. They dated for a short period, but then went their separate ways for a few years. During this time, the two remained friends, maintaining on and off contact with one another. In 2015, Samantha and Tom met again. This time, they became inseparable. They started to hang out every day, sillily not labeling this as dating. One night, Tom took Samantha to their local beach to stargaze. They sat and enjoyed the waves crashing on the shore. As they were getting ready to leave, Tom kissed her. Samantha felt like it was fate. She said, “at that moment I knew we had to be together.”

For the past five years, Samantha and Tom have constantly encouraged each other to be better. They ask one another what they’re interested in, what goals they have. Shortly after dating, Samantha and Tom moved out of their parents’ homes. Samantha then started her journey back at school to earn her bachelor’s degree. Tom took on more hours at work, received additional training, and passed all his classes for his job. The couple tries to take a vacation somewhere new each year. Together, they have traveled to Key West, FL, visited Bushkill Falls, PA, visited friends out in San Francisco, CA, enjoyed the Baltimore aquarium in MA, and visited friends in Anchorage, AL. More recently, the couple bought their own home and Samantha started a new job! 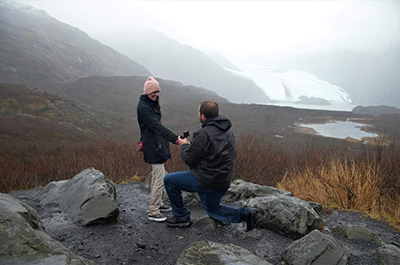 The Perfect Proposal, according to Samantha: “Our friend Dylan is in the military and he, his wife Beth, and their son Louie were transferred to Alaska a couple years ago. Tom and I took advantage of the low airline ticket prices and planned a trip out to see Alaska but to also meet their one-year-old son. We did a lot of sightseeing and ate at a local brewery. On our last day of sightseeing, Dylan and Beth decided that they would take us to see glaciers in a town called Whittier. We found a trail which we could hike up and be able to see the glacier better. As we reached Portage Pass, at a steep elevation of 800 ft., it was raining and quite chilly. As we reached the top of the hill it began to sleet and the wind picked up, but the view was well worth the struggle! We began to take photos and take in the sights. Beth took the camera and began to take photos of Tom and I with the glacier in the background. I turned my back and said I was ready to run back down the mountain to be warm again and Tom stated, ‘Wait I have one more thing to do.’ As I turned toward him again, he was down on one knee asking me to marry him! I had no idea it was coming! I stated prior to vacation I hoped that our trip to Alaska would be the place for a proposal but was not expecting it to be as planned as it was.”

The ring: Tom picked out a ring offered from Kirk Kara that featuring a stunning round diamond. Tom also wanted to display the color purple on the ring, so he decided to put amethyst gemstones within the platinum setting. It’s truly a gorgeous, unique ring! 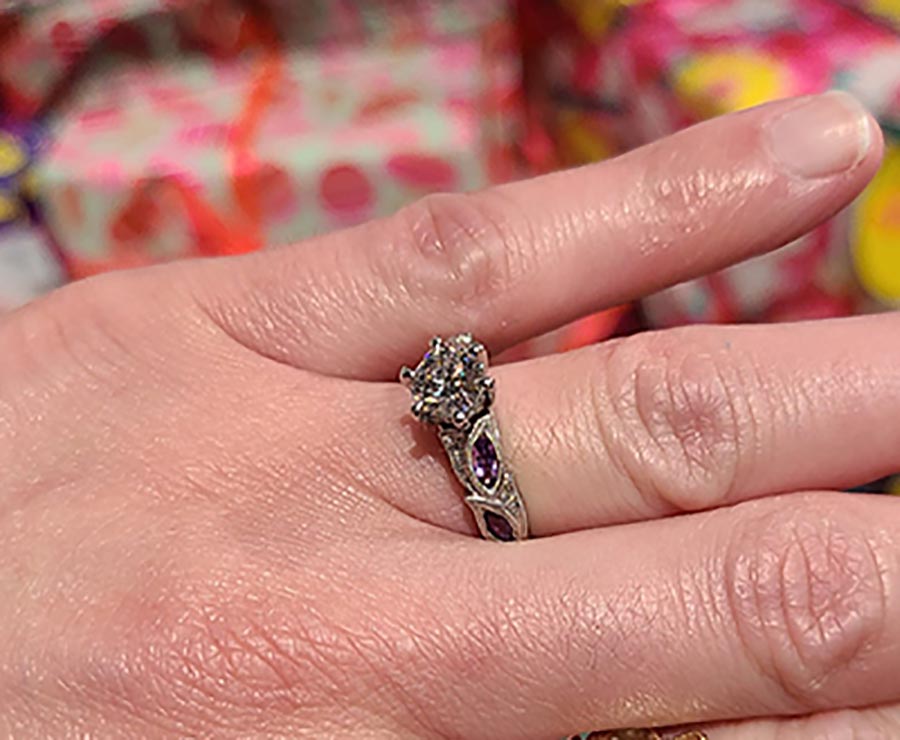 The future: Samantha and Tom are enjoying being engaged for a bit so the ideas for a wedding are still in the making. “Being engaged is the best feeling in the world - that someone wants to spend the rest of their life with you” - Caroline Flack. I couldn’t have said it better. Here at Gerald Peters, we are so happy for the two of you!