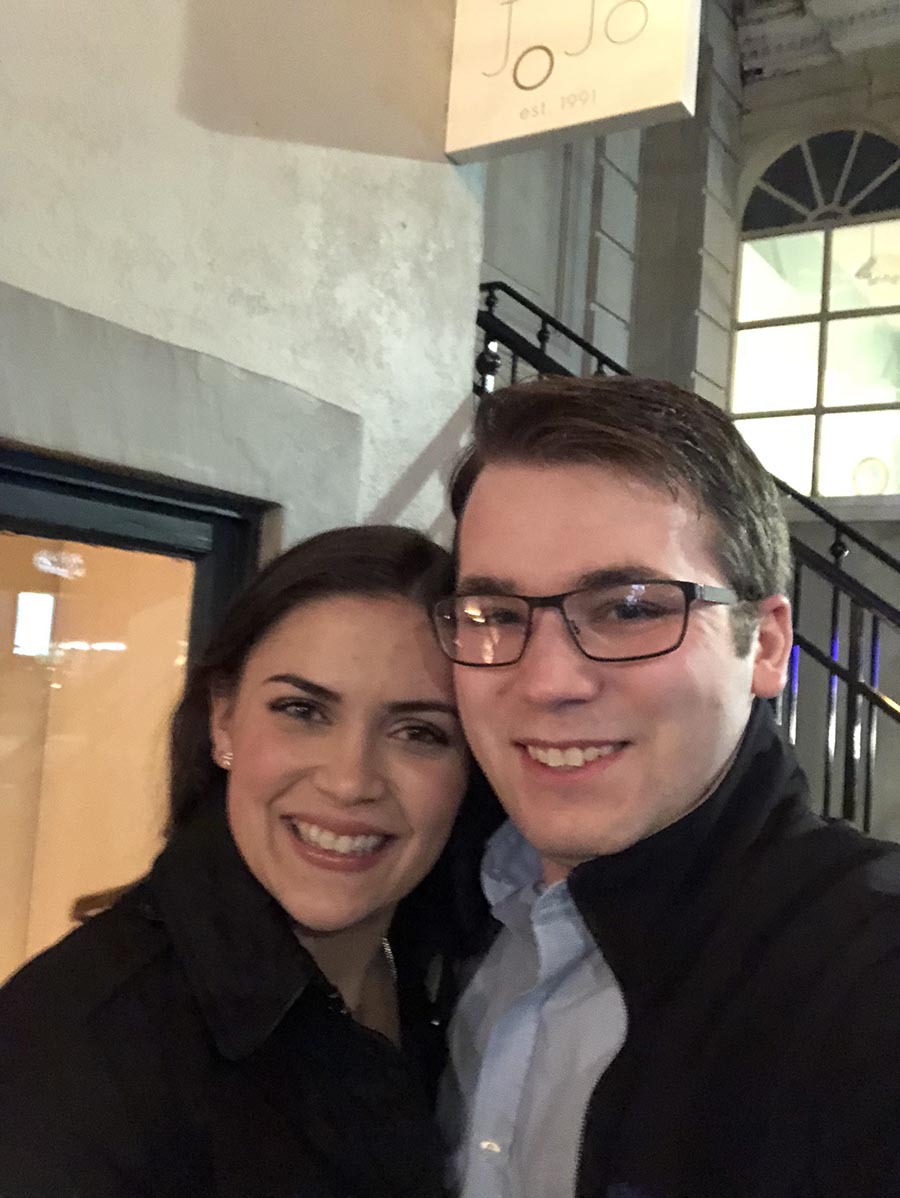 Mike and Alayna's story began in October 2015 when Alayna had to get her wisdom teeth removed. Mike worked as a dental surgical assistant at Staten Island Oral Maxofacial and was assigned to help with Alayna the day of the consultation, and then again the day of her surgery. On surgery day, Mike stopped in the room as she was getting hooked up to all the machines before she was asleep. When she woke up and the dentist asked her if she needed anything, Alayna replied "where's that guy?" referring to Mike and in her anethstetic stupor attempted to get up to find him. Alayna and her mom walked into the next room and spotted Mike, shouting hello across the room, totally unaware of how loud she was. While waiting in the recovery room with her mom, Alayna demanded her mom look for Mike, and after a little resistance she did go find him. As soon as he walked in the room, a still loopy Alayna blurts out "YOU'RE CUTE" and asks her mom for a piece of paper. Mike assumed she was giving him her phone number—ironically enough, Alayna's phone was lost that weekend so she wrote her name down and asked him to find her on Facebook, not realizing how silly it was since he already knew her name from her paperwork and appointments. Later in the day when Alayna came to her senses, her mom asked "do you know what you did today?" and proceed to recount the appointment to her. Alayna was horrified and thought she could never go back to that dentist, only to be surprised later that evening when Mike the dental assistant did indeed message her. He found her lack of a filter cute and charming and after a few days of conversation, they went on their first date. Now over two years and a half years later, Mike and Alayna couldn't imagine their lives with anyone else. 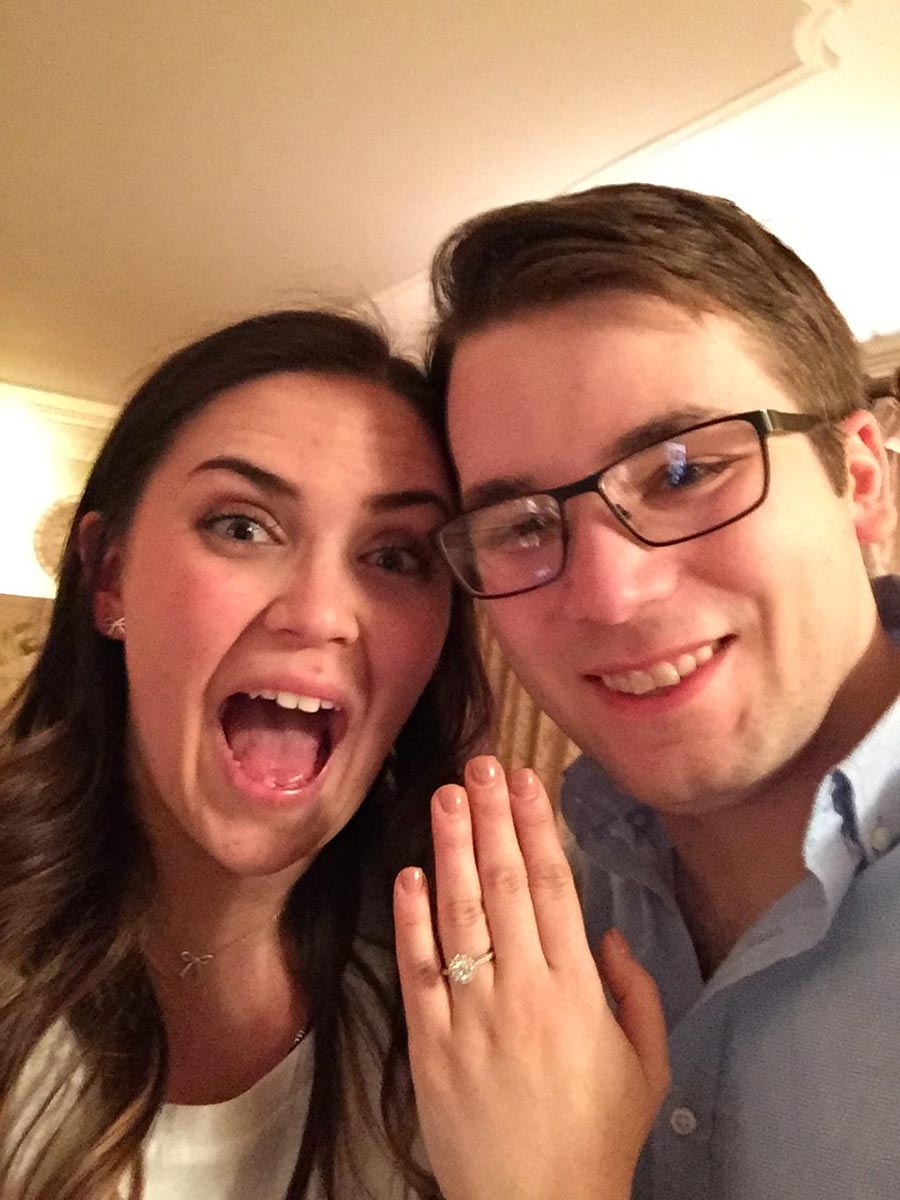 The Perfect Proposal, according to Alayna:

"It happened on Sunday, March 18th—Mike had just come home that weekend from dental school in Buffalo.

Mike and I had dinner plans for the night so we spent the earlier part of the day at his house. His parents were playing it cool but his sister started to act super weird, asking me if I wanted to get a manicure, which I didn't need, and then said she was feeling down and wanted to get her hair blown out, which I agreed to despite having the feeling that something was off. After going for blowouts, I stopped home before leaving for dinner and my parents, who were also in on the plan, did not expect me to be home at all until later. My mom had a strange look of confusion and slight panic and my dad avoided me entirely, claiming to be "sleeping" in an attempt to keep me in the dark. I guess it was obvious that I knew something was up because when Mike picked me up for dinner, he told me straight out â€˜Listen, I know you think something's up but this is not what you think. We are not getting engaged in the city tonight. I just want to relax and have a nice night.' I was even more thrown off because if nothing was happening why was everyone acting so weird?

We went for dinner at JoJo near Central Park, a restaurant where we had gone for one of our first dates—it was the first date we went on that I was able to actually eat, so it was a special place for us (our actual first date was pretty soon after my wisdom teeth surgery so I couldn't really eat much.) Dinner was really great but ended up running late so when I suggested we go out for dessert, Mike said he felt sick and really wanted to just get back to the island. On the drive home, Mike was acting a little odd again but I figured it was because his stomach was bothering him. 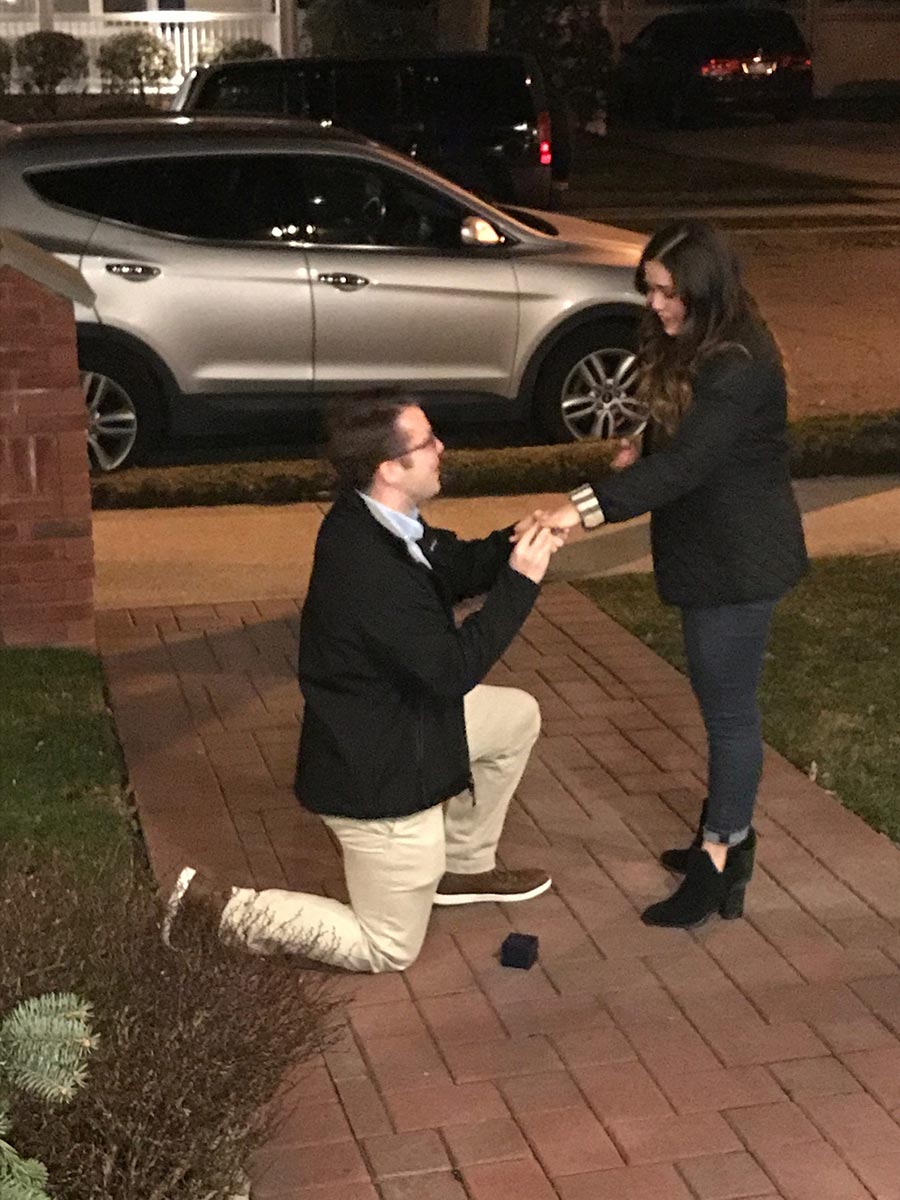 We pulled up to the house and I noticed there were a strange amount of cars parked on my block but it didn't connect. I noticed one of the cars was my cousin's, but still thought nothing of it because it wasn't uncommon for my cousin's family to stop by on the weekends. As we approached the front steps, I noticed there were decorations in the house and faces at the window and took a step back, not fully able to process what was happening. I turned around and Mike was on one knee. The front door opened and everyone was taking pictures and I looked at Mike and it finally hit me—it was happening!

You could see how relieved Mike was once i said yes. He had originally planned on proposing at the restaurant but because I was catching on, he changed the plan and decided to wait until we were at the house so I'd be more surprised. It was a little overwhelming at first because I never thought he would ask in front of so many people but then after it all set in, it was so great to have so many friends and family members around to celebrate with. With all the excitement I barely had a chance to look at the ring until after the fact.

Almost everyone gave it away! My dad could barely look at me! My mom was acting so crazy and some of my friends were being weird too—I normally would have very long calls with my friend Nicole but that day she rushed me off the phone. The blowouts with Mike's sister were definitely out of left field. The only person who was able to keep a totally straight face was my brother, who's like Fort Knox with secrets. I texted my best friend as well, who was in on it the whole time and she did a good job of playing it off (all while she was frantically running around helping my mom get everything ready for later.) 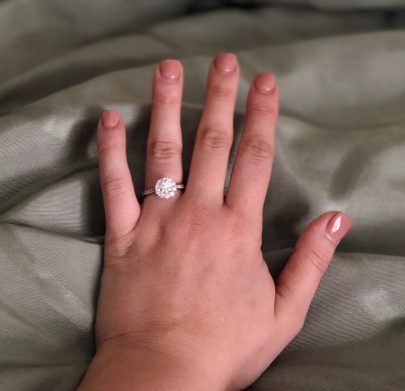 Mike chose a stunning white gold Hearts on Fire ring with a round center stone, halo, on a diamond band in 18K white gold. Though they had never officially gone ring shopping together, Mike knew Alayna's style well from photos she had seen. Mike was excited to be able to choose a ring for Alayna—he felt this was the one thing that he would get to choose for her on his own and be able to surprise her with, and had always planned to visit Gerald Peter's, where he knew he would be able to find the perfect ring. Alayna wasn't expecting for Mike to go crazy on the ring, as he is still in school to become a dentist, so when she saw how beautiful her ring was, she could barely believe her eyes. "I was blinded! I love it so much"

Alayna and Mike plan to get married once Mike is finished with dental school and are looking forward to starting the planning for their October 2020 wedding. Alayna has gotten a jump start and already booked Staten Island photographer, Philip Siciliano, and have chosen to have their wedding at the Maritime Parc in New Jersey.