The beginning: Megan and Jonathan met at the office a few years back, while the two of them both worked for Skybridge Resources. Though never engaged romantically, Megan and Jon used to joke around with each other often, send silly emails to each other, wage bets, and grab lunch with fellow work friends. Eventually, they made one bet that neither of them ended up losing. The bet was about something mindless and work-related. The wager was that if Jon lost, he had to get Megan breakfast from Chick-fil-A for a week. If Megan lost, she had to make him dinner. Jon ended up having to buy Chick-fil-A but before he did, he asked Megan: "So how about instead of me getting you breakfast, we go to Maggianos and get a bottle of wine and go to a movie after?" Megan said "yes." It wasn't until Megan's sister texted her "OMG ARE YOU ON A DATE WITH TODO?!? That's so cute!" that Megan realized she was possibly on a date with Jon. The two ended up having a great time, which led to them hanging out more often, which led to their romantic relationship.

Megan and Jon have always had a really great dynamic and have helped each other in a variety of ways. They always talk to each other and rely on each other for support. Megan said, "I love that we can be ourselves around each other and have great communication." While they were dating, they met each other's families. The first time Megan's grandmother met Jon she was so happy. Right away she told Megan, "he's a keeper." Megan's friends and family love Jon, which makes her love him even more. Megan also met his family in New York and loves his family as well. She said they're "wonderful!" The couple loves to cook and they cook for each other during the week. Though they no longer work at the same company, Megan and Jon have seen career advancements, and have even gotten a dog together! After two years of officially dating, Jon got down on one knee, and asked Megan to be his wife. 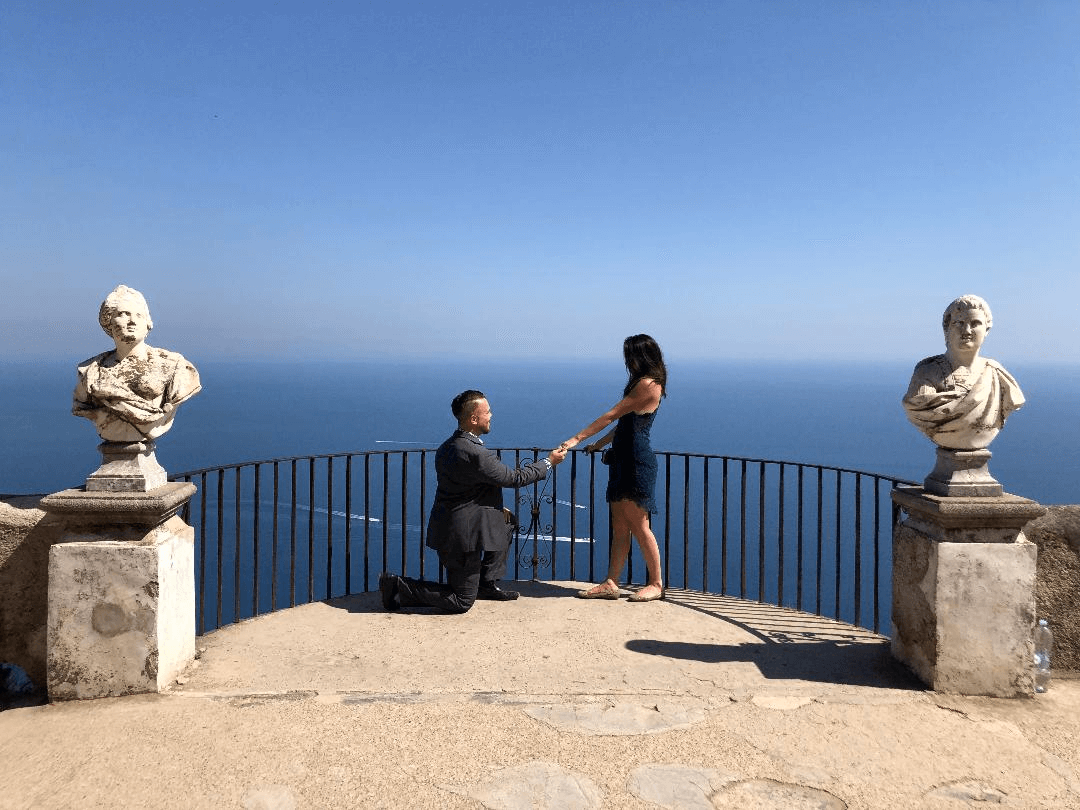 The Perfect Proposal, according to Megan: "Jonathan had planned a trip to Italy and everything was planned out. The day of, I had a feeling that something was going on. He kept harping about how important this day was and that I needed to wear something nice and I should get my nails done (unfortunately, I forgot to get them done before we left and there was nowhere to get them done in Amalfi). The day of the proposal, after the driver picked us up, I got really nervous and felt nauseous. Jonathan was really nervous also; he wore a full suit in 90 degree weather and refused to take off his jacket. We had an amazing day leading up to the proposal. He picked out the spot and everything, at Villa Chambroni. We had lunch there and our waitress knew he was going to propose and kept hinting it. She even gave me a wedding planning book lol. After lunch we walked over to the infinity balcony, a balcony that hangs over a cliff overlooking the ocean. I remember him putting his arm around me and started talking about our relationship and saying â€˜When I first met you, I could never have imagined a life with a girl like you, and now I can't imagine my life without you.' It was the same line he put in a Valentine's Day card and soon as he started saying that, my heart started racing and I can barely remember anything else that he said, but it was so beautiful and sweet. My eyes started watering and as he got on one knee and opened the ring box, I saw something sparkle, but my eyes were watery so I could barely see. I said â€˜yes' and we started kissing. Luckily enough, someone passing by was able to capture the moment on his cell phone. It was the best moment of my life and didn't seem real. It was incredibly special." 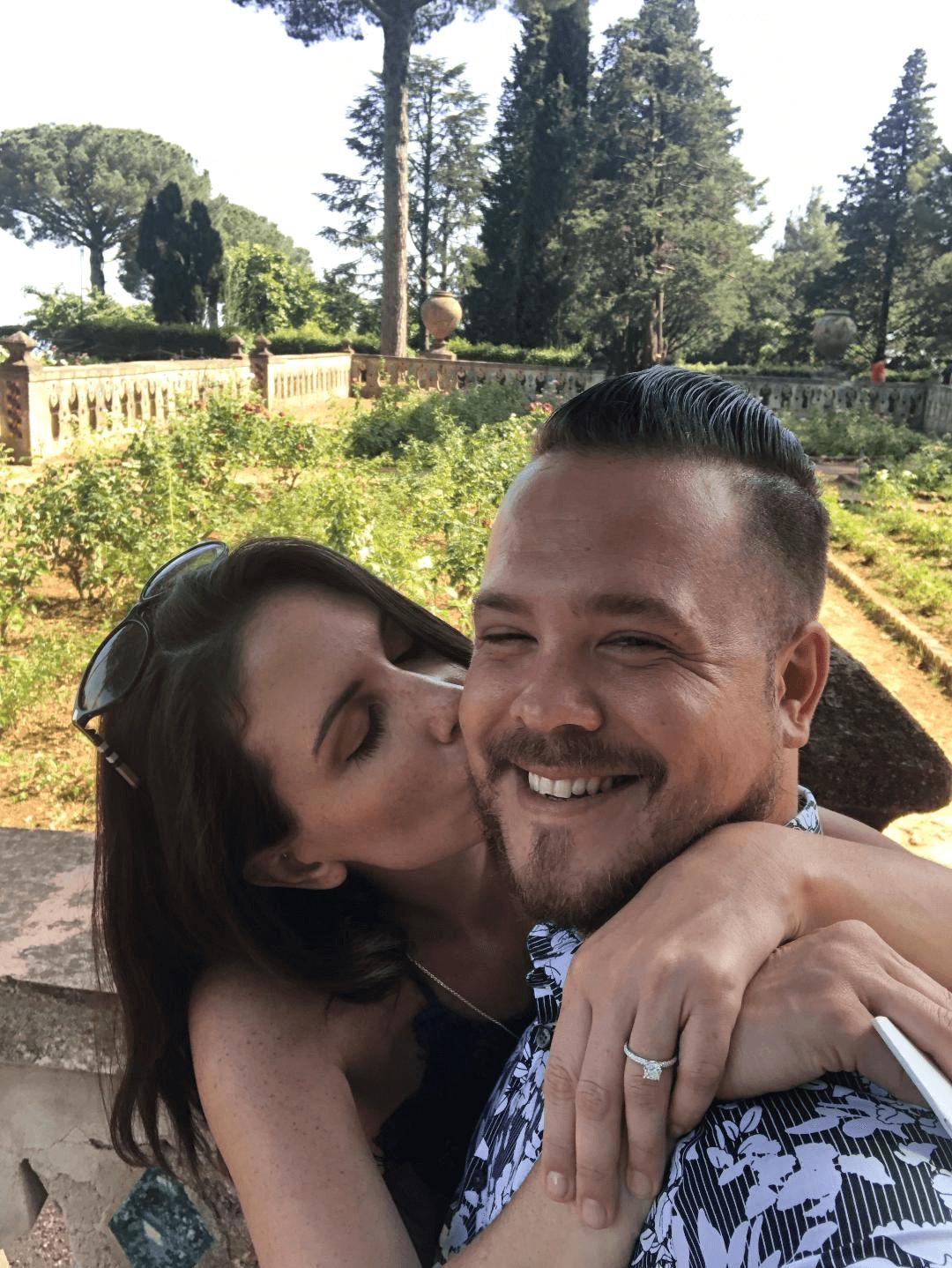 The ring: Megan's ring is a "three-sided" diamond white gold setting featuring a beautiful cushion cut center diamond. Megan exclaimed, "The ring is more perfect than I could imagine!"

The future: The happy couple has wedding plans to be married next year, on September 5th, 2020. Because Jon's family is so big, the two are going to have the ceremony up in north Jersey but at the church where Megan's grandmother belongs: St. Paul's in Patterson, NJ. According to Megan, "It's a beautiful old church and I have a lot of family history there." The future Mr. & Mrs. Todino are having their reception at The Brownstone and are going on their honeymoon afterwards to Bali. They have even been talking about babies and hopefully will be blessed with a few not too long after the wedding! Congratulations to you both. We can't wait to see what the future has in store for you!