Theresa and Chris: The Coordinates Engagement 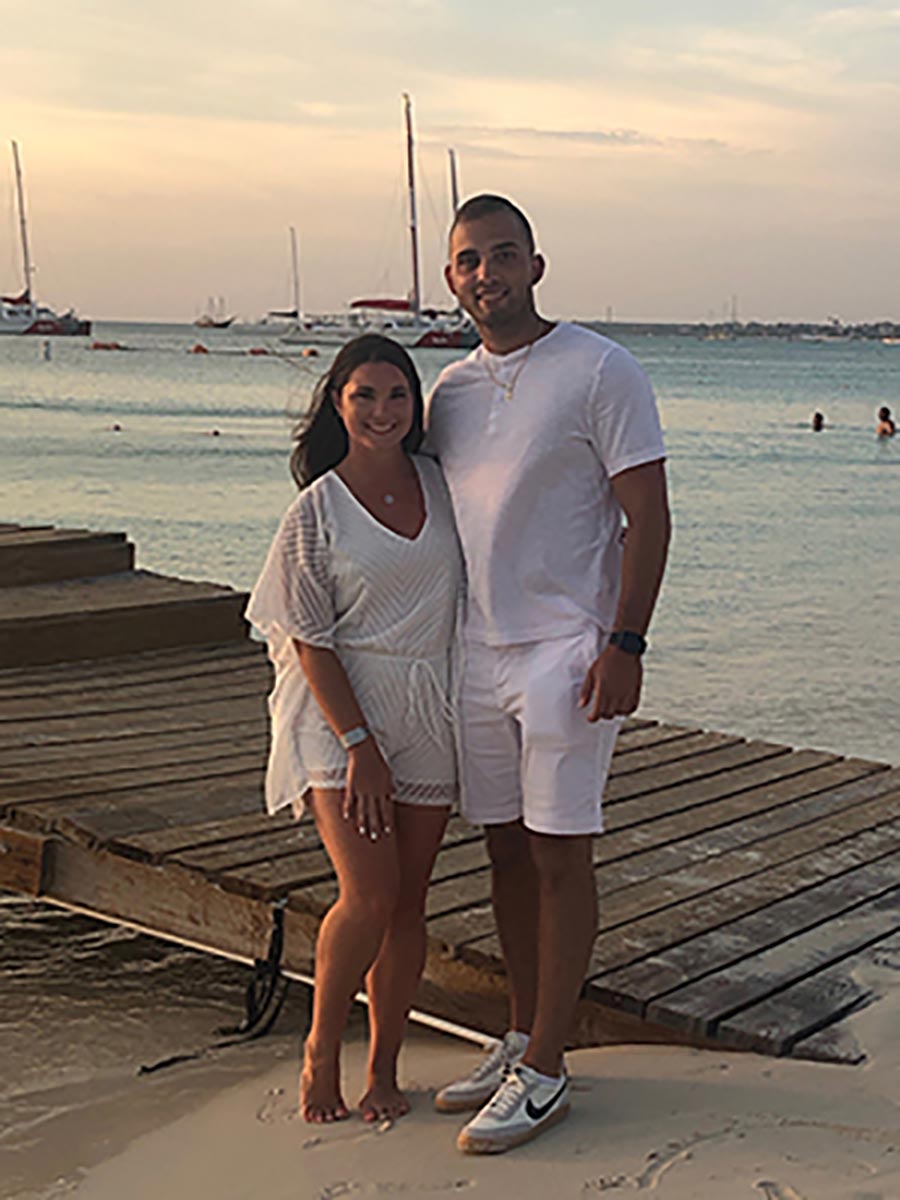 The beginning: Theresa and Chris first met back in 2011 at Archbishop Molloy High School. Chris likes to say that Theresa didn’t like him and, at first, the two were just friends. However, they were actually both in other relationships. When they did both become single, they started talking all the time and telling each other everything. Chris attended Theresa’s Sweet 16 as her best friend, where she claims she was playing hard to get. She said, “I’ll never forget Chris and I dancing and my grandfather tapping him on the shoulder to break us up as a joke.” For six months after the Sweet 16 Chris pursued Theresa, trying to get her to be his girlfriend. And for those six months, she continued to play hard to get. On January 6th 2012, Chris and Theresa went to the Fresh Meadows Movie Theatre in Queens to see a scary movie. It was sold out, so they saw Alvin and the Chipmunks: Shipwrecked instead. Maybe it was the lightheartedness of the film, maybe she was done playing coy, maybe it was the fact that she had strep throat. Whatever it was, on this day, Theresa told Chris she would be his girlfriend, and the couple has been together ever since! 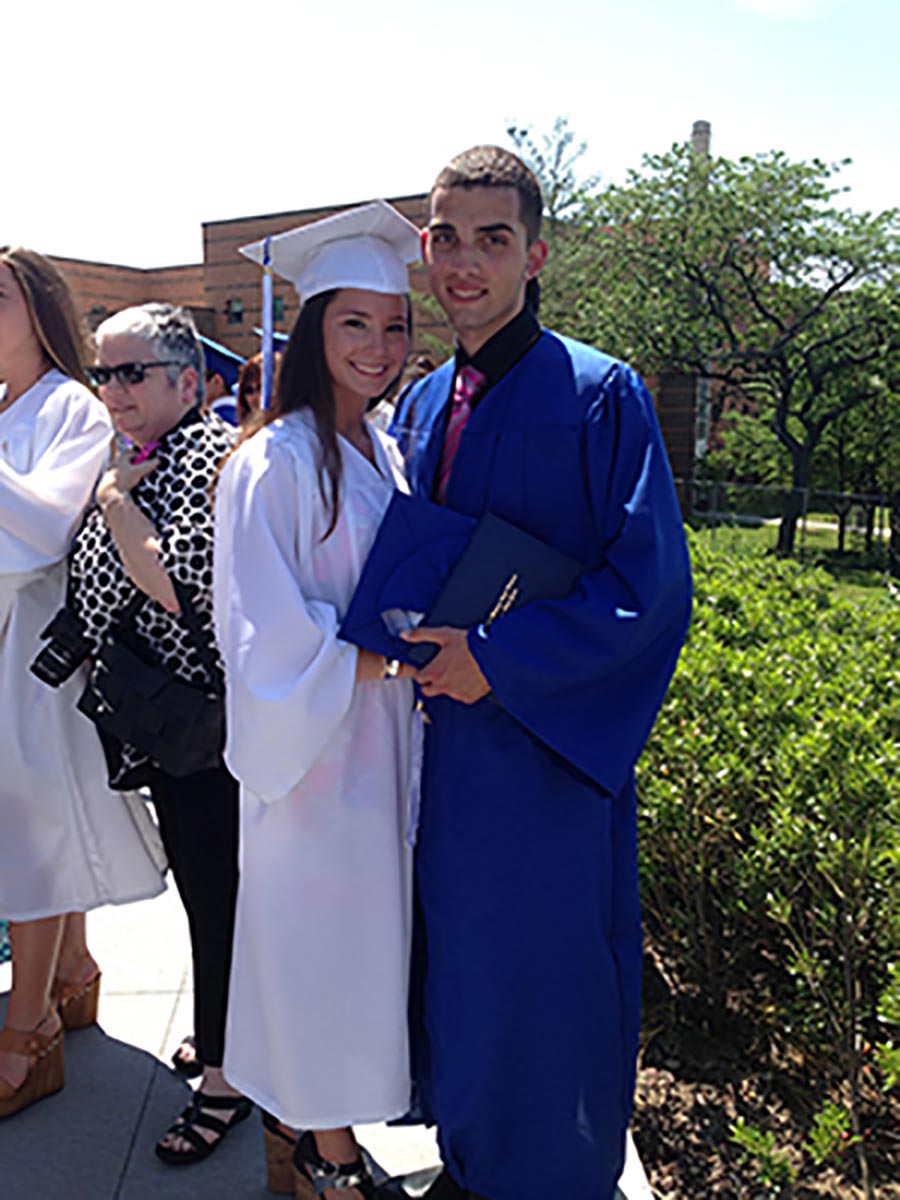 Over the span of their eight year relationship, Theresa and Chris attended both junior and senior prom and graduated from Molloy High School together. They then went to separate colleges and stuck by each other’s side through college soccer and different schedules. When Theresa graduated from St. John’s as a Physician Assistant, Chris was beside her. Two years later when Chris graduated from NYIT from the doctor of Physical Therapy Program, Theresa was beside him. They were there for each other on their first days of work: Theresa as a PA and Chris as a PT. Now that Theresa works nights and their schedules are a little different from the norm, they always find ways to make time for one other.

The Perfect Proposal, according to Theresa: “The weekend before Chris proposed, he told me he was going to plan a ‘date day’ for the following Saturday...I like to plan everything and be in charge so I told him he could plan the day but I needed to know the details...On Wednesday night while I was at work, he sent me a picture of the reservation confirmation from Bedell Cellars for a table for 2 on Saturday August 8th at 1:00pm. Being the crazy psycho girlfriend that I am (yes I admit to it lol) I checked their website and realized they don’t take reservations. I questioned it and Chris made up a whole elaborate story about his friend telling him to call instead of doing it online...Saturday morning rolls around and of course I have no idea what to wear. Usually Chris just tells me to wear whatever I can find but he remembered an outfit I had bought for Greece (since we were supposed to be there now!) and told me to wear that. When we got in the car, Chris told me he forgot his phone and had to go back inside to get it. What he was really doing was getting the ring from my dad in the backyard and while that was happening I was checking the glove compartment (yes I know I’m crazy) for the ring. We picked up bagels on the way and drove out to the wineries. Anyone who knows Chris, knows that he always finishes his meals and everyone else’s and when he didn’t finish his bagel that morning, I knew something was up! About an hour and 20 minutes later we finally arrived at the winery and the clouds were clearing and it was starting to become a beautiful day. The hostess sat us down at our table and I looked at Chris and he was pale like a ghost and had a weird expression on his face. I asked if he was ok or if he wanted to go home and he said that it was just a long drive and he needed a few minutes to relax. A few minutes later, the waitress brought over two rosè filled wine tumblers to us. I was actually upset because I wanted wine glasses so I would be able to post on Instagram! Chris then told me to read the tumbler and on the front were the coordinates of where we met (our high school) and not knowing what was happening I questioned it and thought it was the coordinates of the winery. He then told me to turn the glass around and on the back it read ‘you’ve been my rock from day one so I thought you deserved your own.’ Chris then started to say his speech and couldn’t get it all out because of some tears and he told me to stand up and back up because the photographer (another proposal requirement lol) was right there...Chris then got down on one knee and I literally blacked out. I don’t remember anything else Chris said to me or even asking me to marry him. I was hysterical and full of emotion. All I remember is people clapping and cheering and some random guy yelling ‘did you say yes yet?’ Chris then put the ring on my finger.”

Later, the couple drove back to Theresa’s parents’ house where they were greeted by both their families. Theresa then said that, “around the corner in my dining room my brother’s best friend who is like my second brother was there waiting for me to surprise me and of course the waterworks started again. My dad then led us out to the backyard to hang out and when I opened the door, 30 of our closest family and friends were there screaming ‘Surprise!’ I think I was more surprised with the party then the actual proposal!”

Theresa went on to exclaim, “That was the best day of my life and I am so lucky to have such amazing family and friends to help pull that off even during COVID and keep that secret for MONTHS!” and that she “wouldn’t have wanted it any other way!”

The ring: The ring features a beautiful Cushion Diamond that has tremendous sparkle. It is mounted in a stunning engagement ring that has pave set diamonds and a halo center. The ring truly sparkles from all directions!


The future: Since their engagement, Theresa said that her and Chris have hit the ground running! Their wedding is set for May 14, 2022 at Giorgio’s in Baiting Hollow, NY. Though it was a long (but very exciting) venue search, the couple is thrilled with their plans so far. From all of us at Gerald Peters, we’re thrilled for you as well! 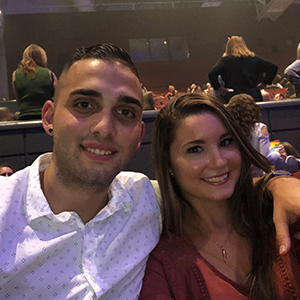